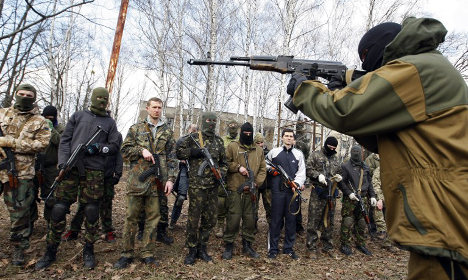 An instructor of the Ukrainian volunteer Azov Battalion conducts training exercises in Kiev. Photo: AFP
"There has been progress, but the situation needs to be improved," Hollande's office said in a statement on Monday.
The four leaders were happy with progress in the ceasefire between the warring parties in Ukraine and the withdrawal of heavy artillery from the front lines, Merkel's office said in a statement.
They agreed on the need for the Organization for Security and Co-Operation in Europe (OSCE) to play a greater role in supervising the ceasefire and requested daily reports on its progress.
The leaders were also united on the urgent need for prisoner exchanges and for the provision of humanitarian aid through the Red Cross.
Once those first steps have been taken, the next step of the ceasefire agreement struck in Minsk last month will come into effect, with working groups put together to tackle further challenges.
One of the first of those will be the organization of regional elections in the Lugansk and Donetsk areas controlled by the rebels.
Senior diplomats from all four countries will meet at the foreign ministry in Berlin on Friday to continue the talks.
France and Germany have led the way in pushing for the truce deal in a bid to end the 10-month conflict that has claimed some 5,500 lives.