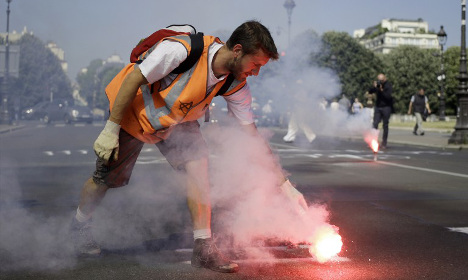 A worker at state-run rail operator SNCF lights a flare in the 2014 strikes. Photo: AFP
French union CGT announced on Tuesday that French train passengers are set to suffer the effects of a new strike, which is set to kick off at 7pm on Monday 9th of March and run to 8am on Wednesday the 11th.
Workers will protest against the same reform package that prompted 12 days of strikes in June. While last year's action was planned by both the CGT and the Sud-Rail unions, next week's strike is only backed by CGT.
Unlike last time, next week's strike is non-renewable, meaning it cannot roll over any longer than the proposed full working day.
The contentious reforms were put into place in January and are intended to tackle the rail sector's soaring debt, which stands at more than €40 billion and was feared to almost double by 2025 if nothing changed.
READ ALSO: So why are the French always on strike?
The reforms aim to cut costs by bringing together 149,000 employees at train operator SNCF and the 1,500 at RFF railway network to eventually open up parts of the service to competition.
The rolling strikes in June were the longest in years and crippled the transport system. They prompted clashes between riot police and protesters, and lost the state-run SNCF an estimated €80 million.
The CGT union has long argued that the reforms would lead to job losses without reducing debt.

SEE ALSO: Why the French are right to strike