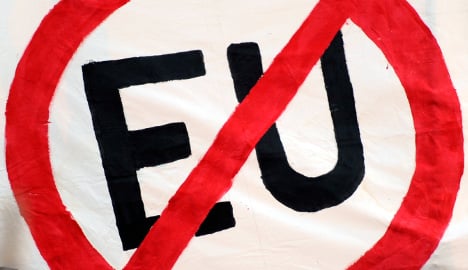 The French are not feeling very positive towards the EU right now. Photo: AFP
Among the French, 43 percent told Gallup pollsters that they “disapprove” of the EU leadership's job performance in 2014.
This was not on par for the trend across other states, where half of the 28 member countries recorded a majority in favour of the EU.
Just 42 percent of the French approved of the performance, leaving the nation seven percentage points below the EU average of 49 percent.
The only countries with lower approval ratings of the EU were Slovakia, the UK, the Czech Republic, Cyprus, and Greece.
While pollsters at Gallup noted that the generally positive response showed a marked improvement across the continent compared to the past 18 months of recession, it was clear that France's economic woes were the prime contributor to the French malaise.
“Europeans who evaluate economic conditions as good or excellent are almost twice as likely to approve of the EU's leadership and considerably more likely to want their country to stay in the EU as those who view conditions as poor," the report read.
The French public has long had a decidedly sour outlook on the EU – despite being one of the Union’s founders and an arch promoter of the project. In recent years, approval ratings of the EU dropped dramatically as the economy ground to a halt.
A study from the Pew Research Centre in 2013 noted that no European country was becoming disillusioned with the EU faster than France.
Tuesday's Gallop poll showed that 35 percent of French people said they thought France's membership in the EU left the country worse off, while 28 percent disagreed, and 34 percent said it made no difference.
Despite the economic turmoil raising EU question marks for many of the French, they showed an overwhelmingly positive response to staying in the EU, with 73 percent responding that France should remain a member.
The poll also found that the majority of Europeans were favourable to staying in the EU.
"With the exception of Cyprus and the UK, at least two-thirds of residents in all countries wanted to continue being part of the EU," the pollsters wrote.