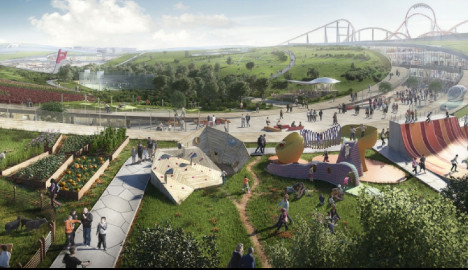 The ambitious Europa City shopping centre is just one of the projects that has provoked opposition from environmentalists. Photo: Europa City

French officials will decide this week whether to go ahead with a divisive dam project (see below) that has provoked violent protests and left one demonstrator dead. Here's a look at some other future engineering projects that have riled environmentalists in France. The Europa City park could look like this if the project is carried on. Photo: Europacity.com

Europa City is set to be the most state-of-the-art shopping centre in Europe, designed to suit the needs and habits of shoppers in the 2021. It is planned for the 'Gonesse Triangle', a new business and commercial district not far from Charles de Gaulle airport in the north of Paris.

The project is scheduled to commence in 2017 but environmental activists argue that an 80-hectare shopping centre, that could welcome as many as 30 million visitors a year by 2020, would destroy fertile agricultural land. Opponents also say Paris has no need for more shopping malls. French eco-activists known as the Zadists have the project in the sights and they are unlikely to let it happen without a fight. The Bure Landfill site located in the north-east of France. Photo: Jean-Christophe Verhaegen/AFP

The planned nuclear waste landfill site, deep underground in north-eastern France, has been criticized for its pricetag (of between €13.5 billion and €36 billion), and for aiming to stock 10,000 cubic metres of “high activity” waste. To appease locals France's nuclear waste agency Andra is already spending €60million ($80m) every year to support local community projects in the sparsely populated area. The group” Bure Zone Libre” is the main opposition but complain their voices have not been heard. Launched 14 years ago by the French and Italian governments in an attempt to link Paris and Milan, this gigantic project went through numerous highs and lows after being highly criticised for the €26 billion cost as well as by eco-activists because of the environmental risks in constructing what would be one of the longest train tunnels in the world, that would run through the Alps.

The long-delayed project has been agreed by the Italian and French governments and is scheduled for completion in 2023. It has become a major flashpoint for the anti-government protest movement in Italy in recent years. Only last month the EU announced it was investigating the project over alleged misspending. French President François Hollande and Italian PM Matteo Renzi finally approved the plan in February and construction should begin next year for the line to be operational in 2028-2029. In 2005 the French government gave the go-ahead for the first new nuclear reactor to be built in 15 years at Flamanville, on the Cotentin Peninsula, in north western France. Construction began in 2007. It was meant to be operational in 2012, but has been hit by a series of problems and only last November authorities announced the latest setback, meaning it will be delayed by another year.

It was highly criticised for the fact that the cost has tripled in the past few years, with most recent estimates suggesting a final bill of over €8.5 billion. The safety of the project was also re-evaluated after a report indicated that the building was riddled with “42 centimetre cracks” which took three months to fix. It's also been claimed the plant faces a serious risk of flooding. Launched in 2009, the “Ferme des 1000 vaches” at Drucat in Picardie, northern France, has been criticised by farmers and environmentalists for putting in danger the animals' heath.

When the first 150 cows out of a planned 1,000 arrived in September last year, protesters, who claim the “industrial agriculture” will ruin livelihoods of smaller farmers, blocked roads and threatened an all-out blockade of the site.

They demanded French construction magnate Michel Ramery to reduce the number of cows by 500. Agriculture minister Stéphane Le Foll says he “doesn't support ” the factory farm but that it “follows the rules”. Some activists against the Center Parcs project are blocking the road leading to the construction site. Photo: Jean-Pierre Clatot/AFP

After being postponed several times since 2007, the project by Pierre & Vacances-Center Parcs has finally been given the green light, but opponents are refusing to lie down.

Violence erupted in a forest in south-eastern France in December after more than 1,000 environmentalists gathered to protest against the construction of a Center Parcs holiday village at Roybon.

While local residents back the project in the Chambaran Forest, and launched a counter protest, hardline environmentalists known as “Zadists” (Zones to Defend) say it will be a disaster for the local area. The works were suspended in December by the local court in Grenoble, but Pierre & Vacances appealed.

The controversy took another turn when Ecology Minister Ségolène Royal announced she was in favour of the scheme, but she wanted the owners to improve and adapt the project. The long-running and highly controversial project near Nantes, western France aims to create a new airport for the west of the country. Plans date as far back as the 1960s and have been thwarted by controversy. The €580 million airport was approved in 2008 but construction has not yet begun.

Environmentalists have a long list of problems with the planned airport at Notre-dames des Landes, but a key point is the destruction of protected species that live in the immediate vicinity of the site, which stands on protected swampland.

In February last year tens of thousands of protesters against building the airport swarmed the Petite Hollande square in Nantes, the latest in a string of demonstrations against the project. The demonstration turned violent as 1,000 radical environmentalists smashed shop windows and trashing a post office and the local offices of Vinci.

The French PM is determined for construction to begin next year. When the airport will finally open, however, is anyone's guess. The “Gazad”, a site near the Sivens dam site, where protesters are camping. Photo: Pascal Pavani/AFP

The controversial Sivens dam project in the Tarn region made global news last year when a man was was killed during violent clashes between environmentalists and police at the site, in south-western France.

The protest came as clearing work began in the forest around the site, but after the death all work was halted.

Opponents say the project will only benefit only a handful of agri-businesses.

The project's chances of going ahead were undermined when the European Commission, the EU's executive arm, said the dam at Sivens, southern France, risked violating European water management rules. The French government has also cooled on the €8.4-billion ($10.5 billion) project.

Later this week the regional government in Tarn is set to announce its decision on whether work on the dam should resume. We can expect further protests if it gets the green light. Will a new high-speed TGV train line through the wine region in south-western France destroy the famous Sauternes wines?

That's what the vineyard owners believe. They say it would be a “death sentence” for some of the vintages that have been around for centuries.

The high-speed TGV train line – would connect the city of Bordeaux with Dax – and would run through the Ciron valley, near to where the famous sweet wines Sauternes and Barsac are produced.

Plans for the new €9 billion line include a huge points section of rails right at the heart of the valley's special ecosystem, credited with providing around 170 vineyard owners the unique microclimate that allows them to make the famous Sauternes vintages, including the famous Château de Y'quem, which can sell for hundreds of euros a bottle.

The project would see around 4,800 acres of forest and farmland destroyed. The train line is scheduled for 2027.