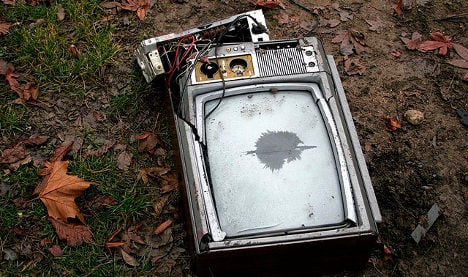 Wouldn't you like to have a "use by date" on your TV? Photo: Leslie Duss/Flickr
Ever bought an electronic appliance that mysteriously stopped working after only a year?
Or found that the spare part missing from your new phone isn't being produced anymore?
Well, these may be troubles of the past in France, after a new decree came into effect this week as part of the 2014 Hamon Law on consumer rights to fight “planned obsolesence”.
The phenomenon occurs when companies intentionally release products with short life spans in the hopes that customers will replace them sooner.
Vendors in France risk fines of up to €15,000 if they do not inform customers in writing about how long spare parts for appliances will continue to be produced.
France will also introduce measures next year to ensure that manufacturers replace faulty appliances free of charge if the product is damaged within two years of purchase.
French environmental agency Ademe reported last year that 66 percent of France's broken appliances are tossed in the trash rather than repaired.