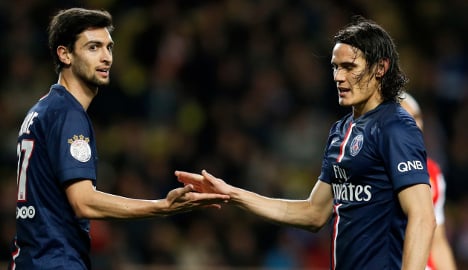 PSG's Javier Pastore and Edinson Cavani look frustrated as their side are unable to overcome Monaco and go top of Ligue 1. Photo: Valery Hache/AFP

Paris Saint-Germain fluffed their chance to go atop the French league with a frustrating 0-0 draw at Monaco on Sunday.

Ligue 1 leaders Lyon suffered their first defeat in 12 matches on Saturday, going down 2-1 at Lille to leave second-placed PSG trailing by just two points with a game in hand.

But the Parisians failed to capitalise on their domination of in-form Monaco, who managed an impressive 10th clean sheet in their last 11 league matches.

"We largely played well but in football you have to turn domination into goals," moaned PSG coach Laurent Blanc.

"Scoring goals is the hardest thing in football and perhaps some of our players don't do it enough.

"We had five or six chances tonight but we didn't manage to get one on target or to score one."

Blanc added: "We'll see at the end of the season if this will cost us. Given how we played, one point is not enough."

The opening chance of the night fell PSG's way after 15 minutes. However, Marco Verratti's lack of height showed as he failed to get his head on a swinging Ezequiel Lavezzi cross nodded on by Fabinho with the goal beckoning.

PSG continued to press and when Lavezzi found Javier Pastore in the box, the Argentinian back-heeled the ball into the path of Edinson Cavani.

Lavezzi was gifted a prime opportunity to open the scoring in the 25th minute after Monaco captain Jeremy Toulalan drifted in defence, but the Argentinian, to his own evident horror, could only poke the ball wide.

With the Monaco defenders standing off, Lavezzi fired another shot just wide of Subasic's left post as some slick passing opened up the left wing on the counter-attack.

With both teams getting bogged down in an increasingly spiteful midfield battle, Monaco's first real chance of the game came in the 35th minute.

PSG coach Laurent Blanc was left hitting his dugout in frustration on the stroke of half-time as Cavani blasted high to wrap up a first half that showed much promise but no reward for the capital side.

There was more to follow early in the second period, first Pastore firing straight at Subasic and then Blaise Matuidi seeing his effort drift wide.

Toulalan was on hand to snuffle out a dangerous Pastore as he surged into the Monaco box with the visiting side dominating possession.

The Argentinian went close moments later after a pin-point through ball from Verratti, but his attempted chip drifted right under pressure from a fast-advancing Subasic.

A toothless Monaco looked a different side from the one which has lost just one of their last 10 Ligue 1 matches and who was last week 3-1 victors over English heavyweights Arsenal in the Champions League.

Two half-hearted attacks were easily dealt with by PSG as the flow of the game slowed going into the last quarter.

But the home side held out to frustrate a PSG side that failed tocapitalise after dominating much of the match.

Earlier Sunday, Nice found the back of the net for the first time in five games but couldn't keep their lead in a 2-1 defeat against Montpellier.

And a Yacine Bammou strike offered Nantes their first win of 2015 when they beat Guingamp 1-0 in a hard-fought Brittany derby.