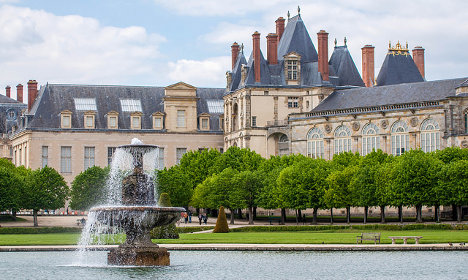 The Chateau de Fontainebleau, south east of Paris. Photo: Bradley Wells/Flickr
The Château de Fontainebleau, a popular tourist attraction south east of Paris, was hit by thieves in the early hours of Sunday morning.
The alarms sounded for seven minutes, but the thieves escaped long before the authorities arrived, reported French newspaper Le Parisien.
Robbers managed to take 15 artefacts from the museum, including a crown that once belonged to the king of Siam, a mandala from Tibet, and gold and bronze treasures from the 18th century.
"They were priceless!" museum head Jean-François Hébert told the paper. "You can't put a value on artefacts as important as these."
"We think they were very determined, knew exactly what they were looking for and worked in a very professional manner," added Hebert.
The break-in took place in the Chinese wing of the Château, which houses a collection mostly gathered by Empress Eugenie, Napoleon's wife.
Hébert said that the theft was a "terrible shock and a trauma" for the team.
The Unesco heritage site was closed for most of Sunday as officials launched an investigation.