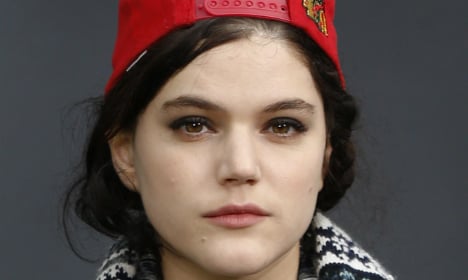 The French musician and actress explains that the songs on her new album "My Dreams Dictate My Reality" — an emotionally searing work full of intense personal pain but with flashes of exuberance — became almost a compulsion to write.

"Whatever is clouding my mind, pretty much if I don't write a song about it, it will continue completely haunting me until I write it out," she told AFP.

"I was having super crazy dreams, and feeling not really suited for the real world," she said. "The whole album was about me trying to feel better and not be as depressed."

Raised in Bordeaux, the moment that has defined much of Soko's life came at age five when she watched her father suddenly die of an aneurysm. She developed a precocious sensitivity, becoming vegan and taking to the arts, aswell as suffering social anxieties.

The childhood trauma lies at the heart of one of the most powerful tracks on the new album, "Ocean of Tears," in which she sings: "Every day I wake up from a crazy dream / Where I'm looking for my daddy, and I know he's here / And I don't want to wake; I can control my dreams / I feel safer this way, 'cause I can disappear."

The bleak introspection is consistent with her 2012 album, "I Thought I Was an Alien." But while the debut work had a low-fi feel, her second full-length album is marked by a heavier edge, with touches of post-punk icon Siouxsie Sioux in her voice and a forceful guitar that at times evokes the Yeah Yeah Yeahs.

"My Dreams Dictate My Reality," which comes out Monday in continental Europe and a day later in the United States and Britain, was produced by Ross Robinson, who has worked with metal bands such as Korn and later with The Cure, whose bass-heavy noir is the most obvious influence on Soko.

While pursuing music, Soko has also had a successful career in French cinema. She has performed in movies including "Augustine" and "In the Beginning," for which she was nominated for a Cesar Award.

Soko last year saw her music go viral online with "First Kiss," a short film for fashion brand Wren that featured Soko and others awkwardly kissing strangers. The video, which has generated nearly 100 million views on YouTube, was set to Soko's song "We Might Be Dead by Tomorrow."

Soko also was widely heard, but not seen, as the voice of the sex surrogate in "Her," the dark Hollywood film on virtual reality romance.

Soko has kept up an active French cinema career — she said, without detail, that she is working on four separate films — but her music is entirely in English and she has been based primarily in Los Angeles for seven years after stints in New York and London.

Soko says that she feels comfortable in the English-speaking world — and sometimes uneasy in France. She voiced dismay at recent criticism she noticed on social media for her lack of poise during a French radio interview, during which she said she was "completely paralyzed" by fright.

"I get such, like, mostly good and positive reactions in the US — and people are really kind. I find people in France being a lot more harsh and judgemental. They love hating everything," she said.

Soko closes her album with the quiet, intimate "Keaton's Song," in which she sings, "You wonder why I hate myself / I'm trying to kill the worst of me / To be the best of you."

The song is an unambiguous reference to the British singer and poet Keaton Henson who had written a song for Soko, "10 am, Gare du Nord," in which he pleads not to be hurt.

Soko, without divulging anything more private, said that "Keaton's Song" offered her take on relationships in an increasingly fast-paced world.

"Before, love was such a sacred thing and people would just stick together because they said so. But now there are so many distractions and people just go through so many lovers and never get settled and never get satisfied," she said.

Despite the darkness, Soko opened the album with the song, "I Come in Peace," a message that was not my accident.

"It's like a will to want to get better," she said. "I really wanted to put it out there."