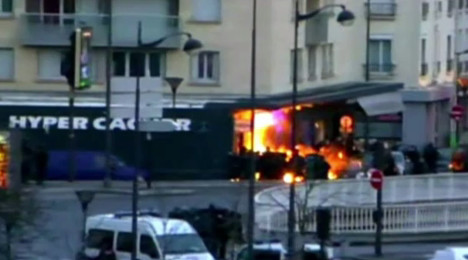 It’s just one of the chilling threats delivered by Amedy Coulibaly to hostages inside a Kosher store in the east of Paris on January 9th.

Coulibaly filmed his bloody attack, in which four people died, on a go-Pro camera attached to his body.

This week the Nouvel Observateur website published extracts from the seven-minute video which includes Coulibaly delivering an anti-Semitic rant.

At one point Coulibaly shouts “Nobody move”, before grabbing a Jewish customer and shooting him dead.

He then turns to another man and asks him his origin. When he responds that he is Jewish, Coulibaly also shoots him dead.

“So you know why I am here then. Allahu Akbar,” shouts Coulibaly.

The video stops after 7 minutes and 45 seconds. It also includes footage of Coulibaly apparently struggling to reload his Kalashnikov.

He had hoped to upload it directly onto the internet, but was unable to.

The gunman even asked for help from one of his hostages but it seems technical difficulties prevented him from showing the world his murderous act.

Coulibaly was eventually killed when police commandos stormed the supermarket to bring to an end three days of terror which also saw fellow terrorists Said and Cherif Kouachi kill 12 people at the offices of Charlie Hebdo magazine.

Another video featuring Coulibaly, who is also believed to have killed a police woman in Montrouge to the south of Paris, was uploaded to the internet in the days after the terrorist attack.

In the video a man, who police believe is Coulibaly, pledges allegiance to the Islamic State militant group.

Speaking into the camera, he says he coordinated with the two gunmen who attacked the Charlie Hebdo magazine on Wednesday, killing 12.

"I am addressing myself first of all to the Caliph of Muslims Abu Bakr al-Baghdadi," he says, referring to the leader of IS.

"I have declared allegiance to the Caliph," he says in broken, stuttering Arabic, wearing Islamic white dress and headgear.

It later emerged that Coulibaly met with one of the Kouachi brothers the night before the Charlie Hebdo attack.