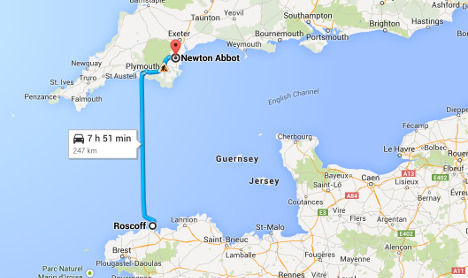 The commute is around 250 kilometres. Photo: Google Maps
Conservative councillor Eve Barisic moved to Roscoff in northern France seven months ago in order to live with her husband who works in France.
The problem? Her ward Newton Abbot is almost 250 kilometres away in Devon – which includes a ferry trip of around six hours each way.
Her opposition has now called on her to resign, with Labour parliamentary candidate Roy Freer saying the commute was an "insult to the people of Newton Abbot and to democracy".
Barisic said she spends about a quarter of her time in Newton Abbot, adding that the criticism only comes now that a general election is on the horizon.
"I really want to serve the people of my ward and I would ask them to judge me on what I do and not where I do it from," she told the BBC.
She told the local Western Morning News paper that she didn't try to hide the fact that she lived in another country, adding that when she's back in Devon she works "from 8am to 8pm".
Barisic is a member of Devon's scrutiny committee, personnel partnership committee and the standing advisory council on religious education group.
She says that she attends all meetings that she is required to, even taking the time to meet with local residents and community groups.
Her opposition were relentless about the situation, however, with Labour candidate Roy Freer saying he was left "flabberghasted", and others comparing the scene to a Monty Python sketch.