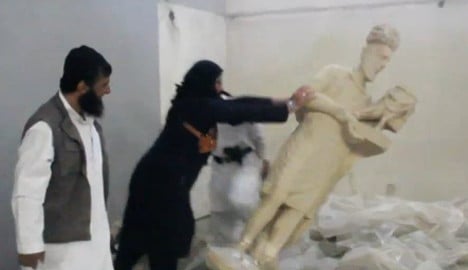 The destruction drew comparisons with the 2001 dynamiting of the Bamiyan buddhas in Afghanistan by the Taliban, and the UN cultural agency has demanded an emergency Security Council meeting.

"These destructions represent a new stage in violence and horror as it is all of humanity's memory that is targeted in a region that was the cradle of civilisation, writing and history," the Louvre said in a statement.

"These priceless collections, monuments and relics have crossed the centuries to bear witness to the history of mankind.

"Through these barbarian acts, they are attacking the raison d'etre of museums — places of dialogue, knowledge and mutual understanding."

The Islamic State group has controlled Mosul since June last year and has destroyed several historical and cultural sites across the country, including Muslim shrines.

In the jihadists' extreme interpretation of Islam, statues, idols and shrines are a material corruption of the early Muslim faith and amount to recognising objects of worship other than God.

Their views are marginal however, and most clerics, even those who promote an ultra-conservative strain of Islam, argue that what were idols in the days of the Prophet Mohammed are now part of cultural heritage.

"Barbarism affects people, history, memories, culture," Hollande told reporters in Manila at the end of a two-day trip to the Philippines. "What the terrorists want to do is destroy all of humanity."