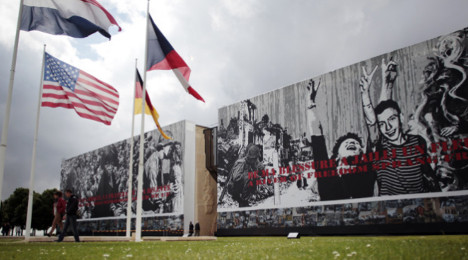 The Caen Memorial where the international press cartoon festival was due to take place. Photo: AFP
The festival has been held for the past four years at the Mémorial de Caen – a museum and war memorial in the Normandy city of Caen – pulling in cartoonists from around the world.
But this year's "cartoon movement" – which was scheduled to take place in April with a guest list of over 40 artists – has been scrapped.
"We can't put people in danger, not the artists, not the public, and not the staff at the memorial," museum head Stéphane Grimaldi told French channel BFM TV.
He added that the website of the museum had been hacked six times since the Charlie Hebdo attack last month, where 12 people were killed by jihadists at the head offices of the satirical French magazine.
"The attacks in Copenhagen only heightened the concerns of the numerous artists who were set to come here," he added.
He refused to comment on whether any of the cartoonists from Charlie Hebdo had been scheduled to appear.
Many will argue Grimaldi's decision to pull the plug on the event can be seen as a blow for freedom of speech in France.
But one New York cartoonist who was due to attend disagreed.
"I wouldn't say that. We are going to meet again, just not now. And anyway, we can still draw our cartoons, whether we meet or don't," Liza Donnelly told The Local.
One furious cartoonist Enki Bilal, who was set to attend the event said: "I think the freedom to create, to express ourselves, should absolutely not back down."
In the aftermath of the Charlie Hebdo attack mass street rallies took place across France on January 11th as the French people vowed "We are not afraid".
But following a Danish gunman's attempt to replicate the Charlie Hebdo attack in Copenhagen, it appears that fear of further attacks is rife.
But Bilal told Europe1 that France must not lose the spirit of January 11th.
"In this mammoth and beautiful demonstration there was all this desire not to bow down and not to be dictated to by the laws of regression, terrorism and intimidation," he said.
However the cartoonists at Charlie Hebdo have refused to be cowed and their magazine has come out fighting.
It upped its usual run of 60,000 copies for its survivors edition, printing 8 million in several languages.
Over 2 million copies of the latest edition were published on Wednesday.