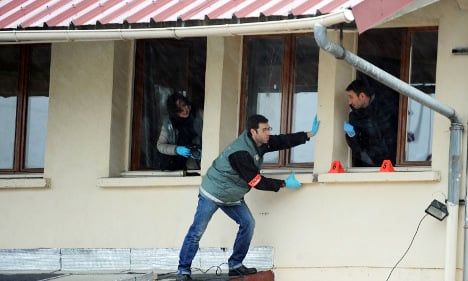 Members of the French technical police at the mosque shortly after the attack. Photo: AFP
The Frenchman, aged 69, was jailed on Wednesday after carrying out an attack on the Le Mans mosque in western France in the middle of the night of January 7th/8th, the same day that Islamist gunmen massacred 12 people at the offices of satirical French magazine Charlie Hebdo.
The man threw four grenades at the mosque and fired several rounds at the building. No one was injured in the attack.
He told the court that he carried out the attack at a time when he "doubted" anyone was inside the building, admitting that he was under the influence of alcohol at the time.
The 69-year-old also said the act was "spur of the moment" and that he had stuck screws to the grenades to instill fear.
"I'm a Republican and an atheist, and what happened at Charlie Hebdo infuriated me," he told the court. "It's putting a barrier in front of the freedom of the press in our country."
The 69-year-old was handed a prison sentence of three years, two of which will be suspended.
The mosque's imam, Mohamed Lamaachi, told French newspaper Le Parisien that the Muslim community "condemned the anti-Islamic act" but forgave the man, explaining that followers of the religion are educated in forgiveness and respect.
The attack was among the first in a long line of supposed "reprisal attacks" on Muslims and Islamic places of worship after the terror attacks.
In the two weeks following the shootings there were 128 anti-Muslim incidents registered – which is almost the same number as in the whole of 2014.
The National Observatory Against Islamophobia said these incidents, which include 33 acts against mosques and 95 threats had been reported to authorities since the January 7-9th shooting spree by three French jihadists that killed 17, compared to a total of 133 such incidents in 2014.
The reprisals were a "predictable" response, according to Samy Debah, the president of the Collective Against Islamophobia in France (CCIF).
"The reality of discrimination is catching up with us," he told The Local recently.
"Muslims are scared. I'm scared for my mother, my sister. I live in a working class neighborhood and I would have never imagined that such things could happen."

READ ALSO: Muslims in France – 'They say we're not French'