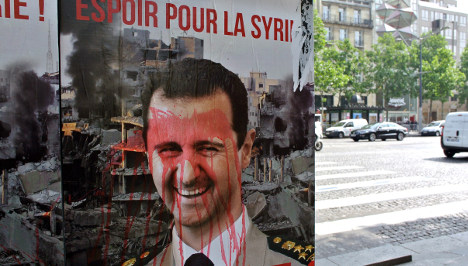 A poster mocking Syrian president Bashar al-Assad is seen on the Champs Elysees avenue in Paris. Photo: Ammr Abd Rammo/AFP
President Francois Hollande on Thursday condemned a group of French lawmakers for meeting with Syrian President Bashar al-Assad, whom he branded a "dictator".
"I condemn this initiative. I condemn it because French lawmakers have taken it upon themselves to meet with a dictator who is the cause of one of the worst civil wars of recent years," Hollande told reporters in the Philippines.
A cross-party group of four French lawmakers made an unofficial trip to the Syrian capital Damascus on Wednesday and held talks with senior ministers.
Three of the MPs — not including one from the ruling Socialist party — then met with the Syrian leader.
Hollande condemned the talks, saying France cannot have a dialogue with a "dictator who has bombed his own people and who has used chemical weapons to destroy human lives, Syrian lives — the lives of children, women".
Earlier PM Manuel Valls also "condemned with the greatest strength" the decision by the French lawmakers to meet with Assad, whom he described as "a butcher".
"I want to condemn this initiative with the greatest strength," Valls told French channel BFMTV.
"For parliamentarians to go without warning to meet a butcher…. I think it was a moral failing."
Jacques Myard, an MP from the opposition UMP party, one of the group to visit Assad defended their decision to travel to Syria.
"We met Bashar al-Assad for a good hour. It went very well," he told AFP.
He described the trip as "a personal mission to see what is going on, to hear, listen."
France cut diplomatic ties with Syria in 2012 and supports the moderate Syrian opposition, seeking the removal of Assad from power.
Myard refused to reveal the content of the talks. Syrian state television said they had discussed "the state of Syrian-French relations, as well as the developments in the Arab world and Europe, especially with regard to terrorism."
According to the Syrian Observatory for Human Rights, a Britain-based monitoring group, the civil war in Syria has left more than 200,000 people dead.
The French government supports the moderate Syrian opposition and wants Assad to leave power.
But four years of bloody conflict, the repeated failure of diplomacy and the eruption of the Islamic State group have undermined France's standpoint as more and more countries consider re-engaging with Assad's regime.