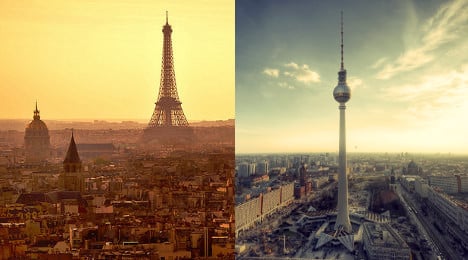 Around 50 employees at a firm in northern France face a life-changing dilemma. Choose between staying where they live and losing their job, or keeping their salaries and moving to Germany.

Workers at Vitrine Magique , which sells garden and household accessories, have to decide between leaving their homes in and around Croix, on the outskirts of Lille and moving to Aachen, western Germany.

Understandably most members of staff are not too happy about moving across the Rhine. But perhaps if they weighed up the pros and cons of the two countries, they might have a change of heart.

The Local has taken a look at how the two countries square up when it comes to all things job related. France recently introduced new rules around parental leave in a bid to boost equality, by encouraging fathers to take parental leave, as well as save millions of euros for the state (knowing that most fathers won’t take up the chance).

Mothers on maternity leave are entitled to 16 weeks on full pay – that normally covers six weeks before the birth and ten after.

Both parents come under the same system of “elternzeit” (parental leave) so mothers and fathers can be confident their jobs are protected by the law for as long as they like until their child turns three.

When it comes to remuneration, Gemany is far more generous.

The benefit is calculated at 65 percent of the parent's previous monthly salary, though it gets boosted slightly if they were earning €1,000 or less. Those with more young children also get a ten-percent (or a minimum of €75 a month) “sibling bonus”.

The total benefits are ring-fenced at a minimum of €300 and maximum €1,800 per month, while parents who were unemployed can also claim at least the minimum €300 a month.

For maternity leave mothers are entitled to full pay during the six weeks before, and eight weeks after, the birth, known as “mother protection time”. The French retirement age is set at 62 for both men and women although, after being elected in 2012, François Hollande introduced a swift reform that allowed those who entered the work place aged 18, to retire at the age of 60.

The age of retirement in Germany is in a bit of a state of flux in that it is currently in the process of being raised from 65 to 67 for both men and women.

However last year Germany was criticized “for sending out the wrong signal” to the rest of Europe, by lowering the retirement age to 63 for those who have been in the workplace for 45 years, or since the age of 18. A ‘Flexi-pension’ was also introduced for Germans wanting to extend their career past 63 years old.

READ ALSO: Ten reasons why France is better than Germany The country resisted bringing in a minimum wage for a long time despite pressure for those on the left. It was eventually made part of a coalition agreement between Merkel’s Christian Democrat Union party and the Social Democrats after the elections in 2013. Germany’s first minimum wage was set at €8.50 per hour, across the country and came into force in January 2015.

The wage does not cover interns, and trainees though.

France – According to Eurostat the average salary in France stands at €2, 430 but over the Rhine in…

Germany – the average yearly wage is around the €3,000 mark Employers will pay their staff 90 percent of their salaries for the first thirty days of their illness and two thirds of it for another thirty days. Paid sick leave is calculated upon the employees’ years of experience. However employees who have worked less than a year in the company will not be entitled any kind of sick pay leave. The first three days of sick leave are normally not paid, although some companies do cover this period.

Parents are normally allowed three days paid leave per year if their child is sick.

In Germany, employers are legally required to provide at least six weeks of sick leave at full salary if the employee can present a medical certificate. After those first six months the employee will receive around 70 percent of their salary, which will be covered by statutory health insurance.

Parents are also allowed up to ten days paid leave each if their children are sick or 20 for single parents. While unemployment continues to be a major issue in France, Germany on the other hand does not have the same problem. The most recent figures showed that the unemployment rate was 6.5 percent in January, down from 6.6 percent in December and the lowest rate since 1990. French workers have a reputation for always being on holiday, or at least in August. Indeed, as well as the 11 public holidays in the year, full-time French employees are entitled to five weeks paid leave per year (25 days), although often they are not allowed to take any holiday in the first year of a job. Then there’s the RTT days for those who work over 35-hours a week, which can add up to a maximum of an extra 22 days off a year.

On average Germany has only nine public holidays in the year, but it often depends on what state you are in. Some like Bavaria have up to 13 public holidays a year. When it comes to holidays, the statutory minimum entitlement is 24 days, although thanks to collective agreements in some professions, the number of paid days off can reach 30.

Ten reasons why France is better than Germany