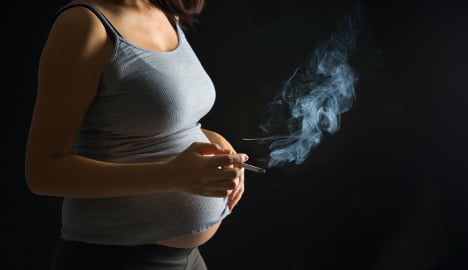 France's pregnant women smoke more than their European neighbours. Photo: Pregnant smoker photo
Nowhere in Europe do pregnant women smoke as much as they do in France, new figures from the National Institute of Prevention and Health Education (INPES) revealed.
Indeed, 17.8 percent of women smoke all the way into their third trimester of pregnancy – and the government has taken notice.
Health Minister Marisol Touraine announced on Tuesday that cigarette packets in France will soon include a non-smoker pregnant woman pictogram.
"France is the European country where pregnant women smoke the most," she told reporters.

(A mock-up of what the new image could look like. Photo: French newspaper Le Parisien)
The aim is to educate women on the dangers of smoking during pregnancy, she added.
The chemicals in cigarettes, which include cyanide and lead, pass into the smoker's bloodstream, which provides unborn children with their only source of oxygen and nutrients. These chemicals can cause stunted baby growth, premature births, and at worse – stillbirths.
Gérard Audureau, the president of the anti-smoking association Droits des Non-Fumeurs (non-smokers rights), told The Local that the situation was "extremely concerning".
"We have to react very quickly, and adding a logo on packets of cigarettes could be something that will discourage pregnant women from smoking," he said. "It could have an effective impact".
"There is no miracle drug in the fight against tobacco, only a group of measures that will cut usage."
Asked why France has such a high rate of smoking among pregnant women, Ardureau blamed French governments for not doing enough over the years to show that smoking was a health risk.
"MPs and senators have always been sensitive to the demands of the tobacco industry who want to continue to show that smoking is normal," he said.

“This is why French woman may have an attitude towards tobacco that is different than we see in other countries where it is well known that smoking is very dangerous,” he said.

Ardureau, also pointed to the fact that for many years, gynaecologists in France, told pregnant women is better to reduce the smoking habit rather than stop it completely, which could cause too much stress.

Other countries, including Brazil, have already implemented similar measures in crackdowns of their own.

(French women smoke more when pregnant than other Europeans. Photo: Raul Lieberwirth/Flickr)
A 30-year-old woman called Sophie told French channel BFM TV that even though she was five months pregnant, she found it difficult to stop.
"I'm not proud at all. I know that it's really bad for the baby," she said, adding that she had cut down from 15 to five cigarettes per day.
"Everyone is telling me how bad it is all the time, my mum, my four-year-old daughter, my friend," she said, explaining that she needed the cigarettes to calm her nerves.
She said that while her gynecologist had also warned her of the risks, he also warned her that being stressed and pregnant was a bad mix too, and that it would be ok for her to have "a quick cigarette now and then".
While levels of smoking among pregnant women in France are the highest in Europe, rates of smoking in general are stable in France.
The percentage of the population who claim to be daily smokers has decreased from 29.1 percent in 2010 to 28.2 percent last year.
Meanwhile, 34 percent of the French say they smoke "from time to time" and 80 percent say they've "experimented" with smoking before.
While the design of the "anti-pregnant smoking" picture remains unclear, French smokers can expect to see it every time they light up within six months.
France has been in the middle of a tobacco crackdown in recent months.
In September, the government announced a raft of measures to cut French people's smoking habits back,including a ban on smoking inside cars when children under the age of 12 are present, the introduction of plain cigarette packaging, and a ban on electronic cigarettes in certain public places.
Smoking is the main cause of death in France, with 73,000 people dying each year of tobacco-related illnesses. Approximately 13 million people smoke in France every day, out of a total population of around 66 million.
Are the French really a nation of chain smokers?