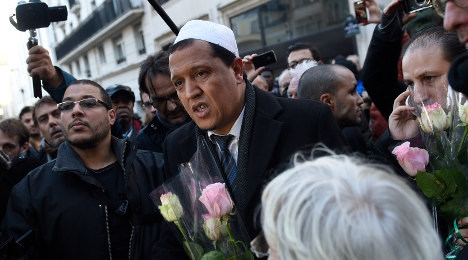 Imams in France will have to undergo civic training courses in future under raft of plans revealed on Wednesday aimed at fighting Muslim extremism. Photo: AFP

The new measures, announced by Interior Minister Bernard Cazeneuve on Wednesday came in the wake of last month’s terror attacks in which 17 people were killed by homegrown French Islamist terrorists.

While the French government has stationed soldiers outside synagogues and vowed repeatedly to tackle anti-Semitism, Muslim leaders have attacked authorities for not doing enough to fight rising Islamophobia since the terror attacks.

Cazeneuve's plan is designed to boost security for the community whilst cracking down on Muslim extremism through dialogue and education as well as the promotion of the Islamic faith.

Here’s a breakdown of the most significant measures.

Security – In January around 1,000 Muslim sites – including cultural centres and mosques – were put under surveillance by the police and military as part of a government crackdown on terrorism. The government now plans to install CCTV on the most at-risk Muslim sites. Any acts of Islamophobia will be logged as such by local authorities, as is currently the case with anti-Semitic attacks, French newspaper Liberation reports.

Dialogue – A new forum is planned to promote dialogue with the Muslim community. It will be made up of the French Council for the Muslim Faith (CFCM) and “all associations that would like to join”. Together, Muslim groups will discuss various issues including the commercialization of halal products and the definition of ritual slaughter.

Imam training –  Much of the focus will be on the training of Muslim preachers, trying to "encourage the emergence of a generation of imams fully engaged in the Republic", an interior ministry source said.

This measure will see the creation of a year-long civic responsibility diploma during in which would-be imams learn about different religions and the values of the French Republic – liberty, equality and fraternity.

Currently six universities offer this civic course in Paris, Lyon and Bordeaux but France plans to increase that number to 12 by the end of the year. More programmes are planned for Lille or Toulouse.

"Certain imams lack knowledge of the language and the law," the ministry official said.

Fighting radicalization in prisons – Radicalisation in prisons is also central to the reform efforts. Two of the three Paris attackers are thought to have been radicalised in prison, where a chronic shortage of Muslim chaplains — there are only 180 nationwide — has often ceded spiritual guidance to extremists.

France's strict secularity laws make it illegal to count people by their religion or ethnicity, but a report on prisons by an opposition MP last year estimated that 60 percent of the prison population (roughly 40,000 people) were Muslim.

Prison chaplains "will only be recruited if they have obtained the new training diploma in the fundamental principles of the Republic," Interior Minister Bernard Cazeneuve said.

Muslim schools – Currently, most Muslim schools are not regulated by the state. The ministry proposes checks on school rectors to make sure their teaching respects the principles of the law and the constitution.

It is a difficult balancing act for the government, and previous attempts to open a dialogue with Muslims have stumbled in the past.

The French Council of the Muslim Religion, set up in 2003, has been widely criticised for failing to represent the full diversity of France's 4-5 million Muslims.

A short-lived Islamic Foundation set up in 2005 was also considered a failure, but has been revived under the new reforms with the aim of providing training, research and cultural expertise.

The reforms have been under preparation for a long while, but the January 7-9 attacks in Paris in which 17 people died, have added a sense of urgency.

The government says they are partly designed to protect Muslims. January saw 176 acts of aggression against Muslims — more than the whole of 2014.

To that end, it is providing cash to improve protection at Muslim places of worship, including video surveillance.

"It is crucial the Republic protects all its children and especially mosques from anti-Muslim acts," said Cazeneuve.