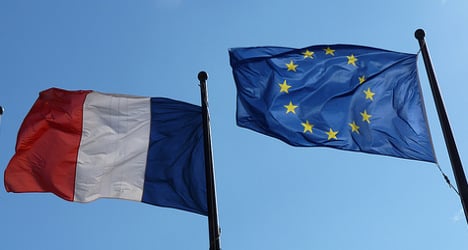 The EU on Tuesday gave France a further two years until 2017 to bring its budget deficit back into line with Brussels rules, the bloc's euro commissioner Valdis Dombrovskis said, meaning Paris avoids a fine for now.

"Today we have decided to propose a new recommendation to France as to how to address its excessive deficit, and set a new deadline for it to be below 3.0 percent, this being by 2017," Dombrovskis told a hastily-arranged press conference.

Theoretically eurozone countries face penalties if their deficit stays above 3.0 percent of economic output but any fine against one of the EU's founding members such as France would have been unprecedented.
In November, the EU gave France, Italy and Belgium an extra three months to come up with plans to cut their deficits back below the 3.0 percent of GDP limit.
France, the eurozone's biggest economy after Germany, had already made two previous requests for an extension, firstly under the presidency of Nicolas Sarkozy and then under current President Francois Hollande.
The European Commission said that France would have until April to submit a new economic reform programme.
"France has already announced reforms in the past few days. We expect France to present a more complete national reform programme in April which we will consider in May," EU Economic Affairs Commissioner Pierre Moscovici said.
The new deadline is in politically sensitive territory during France's next presidential election in 2017.
Feeling the pressure from the EU, Paris in December revised its deficit forecast for 2015 to 4.1 percent from 4.3 percent, still way above the EU's 3.0 percent ceiling.
It also revised its estimates for 2016 to 3.6 percent and for 2017 to 2.6 percent.