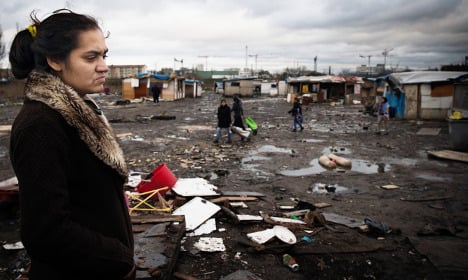 A woman stands in a Roma camp in Ivry-sur-Seine, southern Paris. Photo: AFP
The annual report from Amnesty International has highlighted some ugly aspects when it comes to human rights violations in France – most notably discrimination towards the Roma community.
It noted that more than 19,000 members of the Roma community lived in 429 make-shift settlements across the country and that of these, at least 11,000 were forcibly evicted last year – a controversial tactic that France has employed for many years.
Amnesty blasted France for vowing to provide a "long-term housing solution" for those who were evicted from camps, before apparently failing to deliver what it had pledged.
"On 28 February, an agreement was signed between the government and Adoma, a publicly funded accommodation provider, and some communities evicted from informal settlements were offered alternative housing," the report notes.
"In spite of these developments, most of the evicted individuals and families reportedly did not receive any alternative housing," Amnesty said.
The report specifically mentioned an incident from June when 400 people were evicted from a make shift camp La Parette in Marseille, with only 18 families offered alternative accommodation.
Amnesty also said there was evidence that incidents of violence and hate speech against members of the Roma community were motivated by discrimination, but this was ignored by France.
"Concerns remained that the authorities often did not take into account any alleged discriminatory motive in the investigation of these cases," the report read.
Migrant issues also featured prominently in the report, with the organization pointing out that despite French President François Hollande promising space for 500 Syrian refugees in 2014, less that 350 were given asylum. Amnesty pointed to the report of 85 Syrians being met by police at Gare de Lyon railway station in Paris and given one month to leave Paris – with no option of asylum.
The human rights organization also touched upon other problems in France, including incidents of Muslim discrimination, stating that France had more than once "failed to uphold Muslim women's right to freedoms of expression, religion, belief, and non-discrimination".
It also raised the issue that investigations into allegations of police violence were not "impartial".
"In 2013, the Defender of Rights, an independent public authority, dealt with almost 1,000 allegations of acts of violence perpetrated by police. However, concerns remained about the impartiality and thoroughness of investigations into these allegations by judicial authorities," the report said.
It wasn't all bad news for France, however. The report noted that same-gender marriage has been legal since 2013 and that adoption rights have been extended to include same-gender parents.
Amnesty was quick to add that members of the transgender community are still discriminated against, being offered "psychiatric diagnosis and unnecessary medical treatments" in order to obtain legal recognition of their gender.
As a whole, Amnesty International said that 2014 was “a devastating year” for human rights worldwide. The group also had plenty of specific criticism for Italy, Spain, Denmark, and Austria.