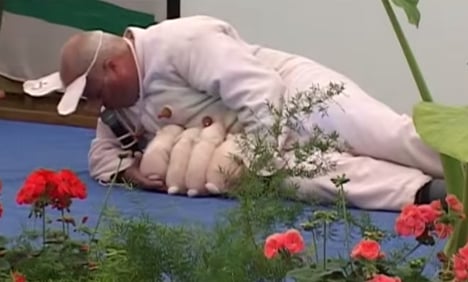 Nono the French pig impressionist at work. Photo: YouTube (screenshot)
Truck driver Noël Jamet, 48, is better known in farming circles as "Nono". But he's better known still for dressing up in pink, strapping on pig ears and a pig-nose, and then using a microphone to do pig noises to the best of his ability.
And judging by his six consecutive titles, he's an expert.
This year, he walked onto the stage at the Agricultural Fair (Salon de l’Agriculture) at the Porte de Versailles in Paris and told the crowd: "I'll give you a good show – here comes the birth of a pig, breastfeeding, and then its death".
The performance looked something like this:
"When it comes to being a breastfeeding pig, you really have to entertain the public," he told French newspaper Le Figaro afterwards.
And for the first year at the fair, the competition wasn't just to be the best in France, with organizers dubbing it the "world championships" thanks to the presence of a Belgian competitor.
The competition pulls in the crowds every year to watch competitors grunt and squeal for a chance to win the trophy.
As for Jamet, when he's not acting like a pig at agricultural shows, he can be found squealing at weddings and birthday bashes.
During a 2014 interview, he revealed as many of his secrets as ever, stating that the best tip to sounding like a swine is to start by saying the French word for "yes", oui. (Jamet, right, winning the championship in 2013. Photo: BBC screenshot)
"From there, you've just got to work at it," he said.
And it's not the kind of skill one can pick up overnight, with Nono revealing that he's been practicing since the age of 15.
But not everyone is squealing with delight over the farmer's imitation.
One YouTube commenter noted that "this man doesn't have any dignity left" while another mourned that they'd simply had "too much internet for the day".
The Agricultural Fair is a big event in the Paris calendar, and it's not just for the farmyard animal imitations. This year, in accordance with tradition, the president was on hand to inspect the livestock and to talk to farmers about the state of agriculture in the country.
Last week The Local reported how the trouble caused by drunk visitors forced organisers to close the festival earlier than usual this year.
This year's fair runs from February 21st to March 1st.