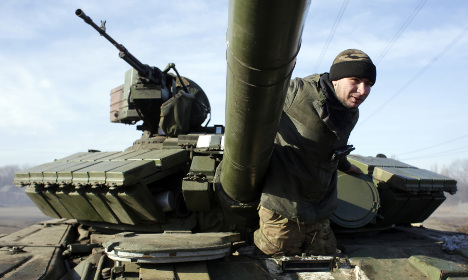 A Ukrainian serviceman climbs out of a Ukrainian army tank. Photo: AFP
Foreign ministers from Ukraine, Russia, Germany and France gathered in Paris on Tuesday to try to revive a shaky ceasefire in eastern Ukraine as Russian President Vladimir Putin ruled out an "apocalyptic scenario" of all-out war.
Top diplomats from the four countries, whose leaders hammered out the initial peace plan in the Belarussian capital Minsk 12 days ago, met in Paris, with Kiev accusing Moscow and pro-Russian rebels on the ground of torpedoing the truce.
"The Minsk agreements are not being respected and everyone has to say clearly that this can not go on," a high-ranking Ukrainian diplomatic source told AFP.
Germany has voiced concern that a "comprehensive truce" remains elusive, but  European Union foreign policy chief Federica Mogherini said the deal was the only hope for peace in Ukraine.
"The agreement is 10 days old, we have to insist to make it work. This is what the Ukrainians are asking us, this is what our duty is as Europeans," Mogherini said on a trip to London.
Fighting has dropped off significantly since rebels ignored a truce to seize the strategic transport hub of Debaltseve last week, but clashes still continue around strategic flashpoints in Ukraine's industrial east.
Ukraine's military said one soldier was killed and seven injured in the past 24 hours and that rebels had again tried to storm the village of Shyrokine which lies east of the key port town of Mariupol.
A rebel commander close to the hotspot village told AFP that three of his fighters were killed by Ukrainian bombardments Monday and that there was "daily fighting".
The continuing clashes have delayed a pull-back of heavy weapons that was due to start a week ago under the peace plan signed in Minsk.
Kiev refuses to withdraw its big guns from the frontline until the shooting stops definitively.
The rebels have claimed several times that they have started to withdraw arms but this has not been confirmed by monitors from the Organization for Security and Cooperation in Europe (OSCE). Apocalypse 'unlikely'
The latest fighting came as Putin — whom Kiev and the West accused of masterminding the conflict — said he thought the prospect of all-out war between Russia and Ukraine unlikely.
Asked in an interview with Russian state television if he thought the current situation could lead to a direct confrontation, Putin said: "I think that such an apocalyptic scenario is unlikely and I hope that it will never happen."
"If the Minsk accords are complied with, then I am sure that the situation will gradually get back to normal."
He added: "No one needs a conflict, moreover an armed one, on the periphery of Europe."
Ukraine has accused Russia of sending in more tanks to bolster rebel forces around Mariupol, the latest allegation that Moscow is spearheading the insurgency.
Moscow denies it is sending arms and troops into the former Soviet state.
However it made similar denials over Crimea — the Ukrainian Black Sea peninsula it annexed last year — before finally admitting that it had deployed forces.
If Mariupol were to fall to the pro-Russian rebels, it would remove a key obstacle to creating a land corridor stretching from Russia's border with Ukraine to Crimea.