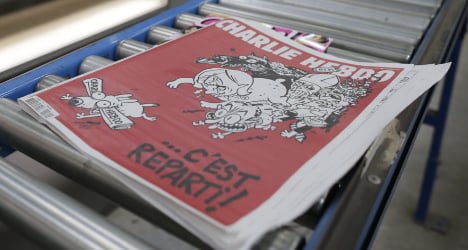 The new issue of Charlie Hebdo will hit the kiosks in France on Wednesday. Photo: Kenzo Tribouillard/AFP

More than a month after jihadist gunmen massacred much of the Charlie Hebdo editorial staff, the magazine is back at work with another savage swipe at its favourite enemies.

The cover of the latest issue due out Wednesday depicts the Pope, a jihadist, former president Nicolas Sarkozy and far-right politician Marine Le Pen as a pack of enraged animals chasing after a dog with a copy of Charlie Hebdo clamped in its jaws.

"We're back!" reads the headline.

The team has lain low since rushing out a "survivors' issue" a week after the jihadist attack that killed 12 people, including five of France's best-loved cartoonists, on January 7th.

"We needed a break, a rest… There were those who needed to work again straight away, like me, and those who wanted to take more time," says Gerard Biard, the paper's new chief editor.

"So we reached a compromise, and agreed on February 25th… to start off again on a weekly basis."

Charlie Hebdo has a long history of courting controversy by lampooning political and religious figures of all stripes.

The Kouachi brothers who carried out the January 7 attack said they were taking revenge for the weekly's depictions of Prophet Mohammed — considered blasphemous in Islam.

In a show of defiance, the magazine's "survivors' issue" featured Mohammed on its cover with a tear in his eye, holding a "Je Suis Charlie" sign under the headline "All Is Forgiven".

"Je Suis Charlie" was the slogan taken up around the world to express solidarity with the weekly.

Some eight million copies were printed, a stunning number for a publication that had been struggling to stay afloat with a circulation of just 60,000 before the attack.

A print run of 2.5 million is planned for the new edition.

Biard said the new issue will inevitably deal with extremism, particularly in light of the shootings in Copenhagen on February 14th and 15th.

"It's just as relevant as before. I know some will say that we are obsessed, but we're not the ones who are obsessed," Biard said.

"After Copenhagen, we will be forced to talk about it again. But there's also Dominique Strauss-Kahn, it's lucky we have him!"

Biard was referring to the former head of the International Monetary Fund, whose trial on charges of aggravated pimping this month brought to light salacious details of his sex life.

So the team is back at the drawing board.

"For this issue, we're starting over. The funerals have taken place, we have to make do with the absence of the others, and that's where it's tough," Charlie Hebdo columnist Patrick Pelloux said in a television interview.

"We've been realizing for some time that they didn't just go away on holiday.

"The newspaper, just like any newspaper, must continue because life goes on, the news continues."

The editorial team is still working out of the offices of left-wing daily Liberation, where they relocated following the attack, but they are thinking of moving in a few weeks.

They visited a location in the south of Paris, but security now guides their choices.

"Nothing has been decided yet about these premises," Biard said, adding that a study was under way to determine whether the site could be fitted with a secure entrance.