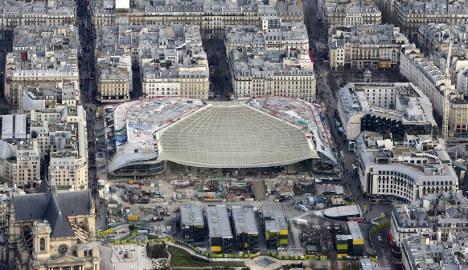 An aerial view of Les Halles shopping mall in the centre of Paris which terrorists have threatened to attack. Photo: AFP
Somalia's Al Shabaab militants, Al-Qaeda's main affiliate in east Africa, released a video over the weekend in which it specifically named two Parisian shopping centres as western targets.
The Forum des Halles, a large underground shopping centre in the first arrondissement, and Les Quatre Temps in the north-western suburb of La Défense, were specifically mentioned along with The Mall of America in Minnesota, the West Edmonton Mall in Canada, and the Oxford Street shopping area of London.
The number of security guards at the two centres in Paris  – which were already on alert after the recent terrorist attacks – has been increased as a result of the video threats.
Management at the two malls are in permanent contact with police headquarters in Paris and the department of Haute-Seine as well as the interior ministry.

But Jean-Michel Silberstein, president of the National Centre of Shopping Malls (CNCC) vowed not to fall victim to fear.

“These new threats do not change much in terms of what we have experienced in recent weeks,” Silberstein said.

“We do not want to create a climate of anxiety in the shopping centres, because the spirit of January 11th (the day of the "Je suis Charlie" mass public rallies throughout France) is that of a country that resists.”

The costs of security have increased by 30 percent in the aftermath of the terror attacks.

The video, which is nearly 80 minutes long, features masked men speaking directly to the camera.
One of them urges "Muslim brothers to target the disbelievers wherever they are". (A screenshot of the terrorist video)
He adds: "If just a handful of mujahedeen fighters could bring Kenya to a complete standstill for nearly a week, then imagine what a dedicated mujahedeen in the West could do to American or Jewish-owned shopping centres across the world".
Sixty people were killed in Nairobi in 2013 after Al Shabaab militants went on a three-day siege at the Westgate shopping mall. Nearly 200 people were reportedly injured.
Islamic extremists from Isis have also threatened attacks on Paris in recent months. In September, the group called on Muslims to target French people, who they referred to as “dirty” and “spiteful”.
The September video also targeted Americans, Europeans, and Australians. The speaker said that attackers needn't use a gun for the attack: "Smash his head with a rock, or slaughter him with a knife, or run him over with your car, or throw him down from a high place, or choke him, or poison him.”
Interior Minister Bernard Cazeneuve responded in a televised statement that France was not afraid.
France is still on edge after the January terror attacks in Paris, in which 17 people were killed in attacks at the offices of the Charlie Hebdo magazine, a kosher supermarket and in a street to the south of Paris.