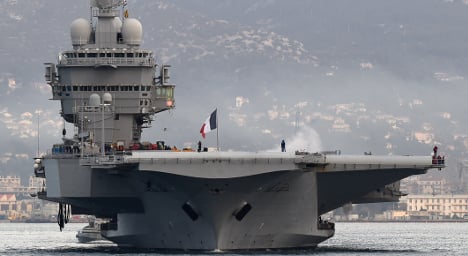 France deployed an aircraft carrier in the Gulf on Monday as part of the US-led military campaign against the Islamic State jihadist group in Iraq, a defence ministry official said.

"The integration of the Charles de Gaulle in the operation… (in Iraq) begins this morning," a member of Defence Minister Jean-Yves Le Drian's staff told AFP as his entourage made its way to the carrier.

The first Rafale fighter jet took off in the morning from the Charles de Gaulle as it sailed about 200 kilometres (120 miles) off the coast north of Bahrain in the direction of Iraq.

The warship's deployment will cut in half the time it takes for the planes to reach Iraq for strikes against IS from their base in the United Arab Emirates.

France launched Operation Chammal in support of the US-led coalition against IS in September.

It has nine Rafale and six Mirage fighters operating in Iraq from bases in Jordan and the UAE, along with a maritime patrol and a refuelling aircraft.

The Charles de Gaulle left its base in Toulon on January 13 for a five-month mission that will include several weeks in the Gulf working alongside the USS Carl Vinson as part of the coalition launched after IS seized swathes of Syria and Iraq last year.
The French carrier is then to travel to India, where it is due to take part in exercises in mid-April.
Carrying 12 Rafale and nine Super Etendard fighters, the carrier will significantly increase French air capabilities in the region.
French warplanes have carried out about 100 reconnaissance missions and the same number of strike raids in Iraq since mid-September in support of Iraqi forces and Kurdish peshmerga fighters battling IS on the ground, ministry sources said.
France is, along with Australia, one of the main contributors to the 32-member coalition effort aside from the United States, which is carrying out the bulk of strikes.
The coalition has carried out more than 2,000 strikes since August, with France and other Western nations conducting operations over Iraq and several Arab nations taking part in strikes over Syria.
The campaign aims to support forces in Iraq and Syria, including rebel fighters and Kurdish forces, fighting IS on the ground and to hit infrastructure seized by the jihadist group such as oil facilities.
While excluding the deployment of ground combat troops, coalition countries have also sent trainers to work with Iraqi forces.
US military officials have said they want Iraqi forces to launch an offensive to retake the strategic northern city of Mosul from IS in April or May.
The Charles de Gaulle strike group also includes an attack submarine, a French anti-aircraft frigate and the HMS Kent, a British anti-submarine frigate. In total some 2,700 sailors are involved in the mission, including 2,000 on the carrier itself.