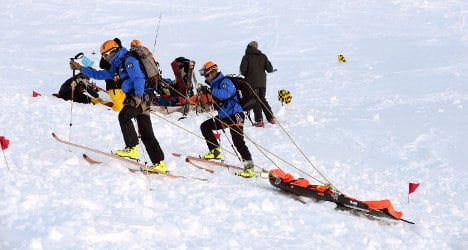 The death toll from avalanches in the French Alps is high once again this winter. Photo: Pierre Clatot/AFP

The weekend death toll in the vacation-packed Alps rose Sunday when a man was killed in an avalanche in France, after four people perished earlier in a snowslide in Switzerland, police said.

A man in his fifties was killed and two of his companions were gravely injured Sunday after an avalanche swept their cross-country skiing party of four away near the Isere town of Saint-Honore, police in Grenoble said.

The fatalities occurred in the Taillefer range of the French Alps at an altitude of 1,700 metres (5,577 feet) in the region crowded with holidaymakers.

According to authorities monitoring avalanche activity in France, Sunday's death brings total fatalities from snowslides in France since the winter began to 28.

On Saturday a group of six Italian cross-country skiers were caught by an avalanche in the Great Saint-Bernard Pass in the Swiss Alps at an altitude of 2,300 metres.

Three members of the group — women and men all in their fifties — were killed in the accident, while a fourth victim died of his injuries Sunday.

At least 26 people are known to have died in avalanches this winter in Switzerland.

Following the French slide, authorities in the Haute Savoie department posted a heightened avalanche alert for the region, "taking into account the temporary warming accompanying midday and afternoon rains.

"In the coming days, off-trail activities are not advised: be responsible, think about other people you may be putting in danger by provoking an avalanche, and of rescue workers risking their lives," the statement said.