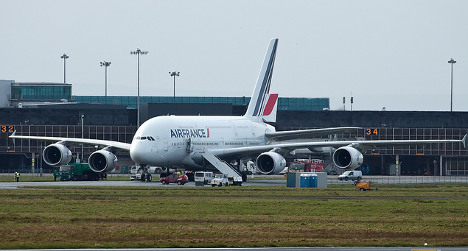 An Air France flight from New York to Paris landed in Manchester so the pilot could fulfill his legal obligation to rest. Photo: AFP

When the A380 plane from to Paris finally took off from a freezing New York, passengers were probably thinking the worst of their problems was over.

The flight had already been delayed six hours due to heavy snow in the US.

However with the French capital just an hour or so away, the pilot announced that he was diverting the plane to Manchester because he had been at the controls for too long and was obliged, by the company's strict rules, to take a rest.

If he had carried on flying he would surpass the allowed "quota of hours", which is strictly forbidden due to the risks.

The problem for passengers was that Air France had not organized for alternative planes or pilots to come and take them on to Paris. They were forced to wait 12 hours in Manchester Airport before they were flown on to Paris.

"People are going crazy. We've been here since noon and we have three children with us. There are also unaccompanied minors who have been left by themselves without any supervision. These children are crying," one irate passenger told BFM TV.

For Air France the fact the pilot decided to divert the plane just an hour short of Paris was entirely normal as the legal rest periods must be respected "to within a few minutes," a spokesperson told BFM TV.

The company said the crew had initially hoped to make it to Paris but were unable to make up enough time crossing the Atlantic.

The company's spokesperson said not respecting the rest times would be the equivalent of "someone driving at 180km/h with two grams of alcohol in the blood."

Air France pilots normally work a maximum of 75 hours a month, but the rest times they are forced to respect depends on the flight time and the time difference between destinations.