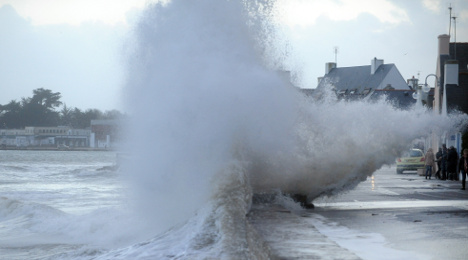 France isn't set to witness the slightly misleadingly-named 'tide of the century' until next month, but coastal towns were given a taster of what to expect on Friday.

Experts have been warning of so-called 'supertides' along the western coast, this weekend, which will just offer a taster of next month's 'tide of the century'.

It's all due to the alignment of the Earth with the Moon and the Sun causing the gravitational pull on the oceans to be higher than usual this year.

French coastal towns have been battening down the hatches and laying out the sandbags as surging seas and high waves caused a fair amount of concern, not least for BFM TV's weather presenter Fanny Agostini, who was given a surprise soaking in the clip below.

The high tides this weekend and the fact that they could cause coastal flooding has put local authorities on alert.

"Of course I'm worried, even if the weather forecast is reassuring and we have put in place an emergency plan," said Alain Bachelier, mayor of Saint-Jean-le-Thomas, in western Normandy where around 140 houses are threatened if the sea breaks the natural barrier of the sand dunes.

Communes up and down the coast have been stocking up on sand bags and on the Island of Oléron, in Charente Maritime, they have brought in a 700 metre-long inflatable barrier.

France’s marine and oceanic service “Shom” has called for vigilance ahead of the high tides. It has warned coastal walkers, fishermen and swimmers “to not adventure too far”, because the “sea will rise quicker than a man can run”.

At the famous Mont-Saint-Michel, off the coast of Normandy, the tide could rise by up to 15 metres.

Last December the Unesco World Heritage site officially became an island last December with the opening of a new bridge, but Friday's high tide saw the sea swallow it up. See picture below from Ouest France newspaper.