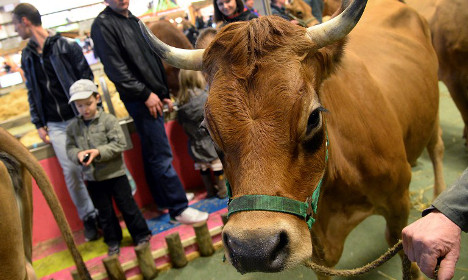 A bovine feature of last year's Agriculture Fair in Paris. Photo: AFP
The Agricultural Fair (Salon de l’Agriculture) is held at Porte de Versailles every year, and usually offers one night where the doors are open until 11pm.
But this year's event, which kicks off on Saturday and runs for over a week, won't feature the main night. In its place, the gates will stay open for two "semi-night shows" on Wednesday and Thursday until 7pm and 8pm respectively.
Why? Because visitors tend to get drunk and unruly.
At least that's according to Jean-Luc Poulain, the president of the agency behind the fair, CENECA.
"The risk of alcohol-related outbursts was enough to see half the traders close their stands early last year," he told French news channel BFM TV.
See what else is on in France this month
"There are simply too many people getting drunk, irritating the vendors, and bothering the animals."
Some vendors, however, were irritated more by the loss of business they'll suffer from having to shut up shop earlier.
One complained to the channel that he wasn't even given a discount in rental space fees, and would still have to pay €400 per square metre. Another moaned that those few hours could amount to thousands of euros in sales.
This year's fair runs from February 21st to March 1st. Spectators can expect rural fun, plenty of animals, and agricultural machinery. There'll even be an "animal version" of the Miss France contest.
The event is popular in France, with familiar faces often making an appearance. President Francois Hollande has visited in recent years, and made headlines in 2013 when he made a joke about his predecessor that riled the opposition.