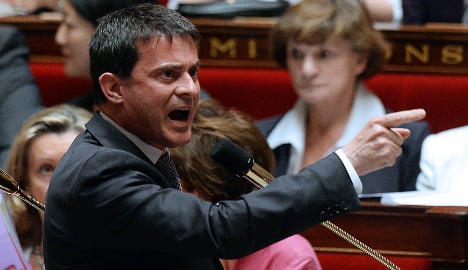 PM Manuel Valls faces a rebellion among his party but it's unlikely to topple him. Photo: Pierre Andrieu/AFP

The Socialist party rebels, known as "Les Frondeurs", whose opposition to the government's economic reforms sent the majority party into crisis, are angry.

They feel the raft of reforms that includes extending Sunday shopping and opening up key parts of the economy are not what they signed up for.

Their rebellion against the bill put together by ex-banker-turned economy minister Emmanuel Macron's prompted Prime Minister Manuel Valls to employ a rarely-used constitutional device to force through the package of reforms without a parliamentary vote.

That prompted the opposition to table a motion of no-confidence in the government and infuriate the leftwing rebels even further. But their anger has limits it seems as most will not vote in favour of a motion, that if passed would force Hollande to declare new elections.

Nathalie Chabanne a French deputy from the south west of the country told The Local she was against Macron's bill, but voting against the government is a totally different matter. (Nathalie Chabanne, one of the "Frondeurs"). Photo: Laurent Pascal

"I personally would have voted against the draft bill but now we are being asked to back a vote of no confidence, submitted by the opposition. It's not the same.

"I will not vote for it because I am against the text of the motion. However I remain convinced that things need to be done for François Hollande's five-year term to be a success and want the president to pacify the current climate."

Perhaps Chabanne's stance has been influenced by threats from government spokesman Stephane Le Foll, who warned that Socialist Party members who back the motion would "have no place in the party."

"I am not surprised by his reaction," Chabanne says. "Voting for a no confidence motion submitted by the opposition is inconceivable for a Socialist."

"We are still part of the majority and we are still Socialists. I am not going to abandon my convictions simply because I do not agree with a draft bill."

The government says the reforms they are vital to "unblock" the eurozone's second-biggest economy, which is suffering from chronically high unemployment and sluggish growth.

They are also seen as crucial in Brussels, where the EU has urged France to reform in order to bring down its ballooning budget deficit, which is far above European limits.

In a speech preceding the vote, Valls will stress his "determination to carry on with the reforms," according to his entourage.

On Wednesday, he condemned the "conservatism, irresponsibility and childishness" of those who oppose the bill.

The reforms will give the struggling French economy "a fresh lease of life," Valls said.

Chabanne, however, said if Valls doesn't start to listen to parliamentarians then other bills will prompt a similar reaction from rebels in future.

The opposition UMP party has seized on the government's need to force the bill through parliament — the first time the constitutional device has been used since 2006 — slamming Valls as weak and unable to carry his majority.

The head of the conservative UMP, former president Nicolas Sarkozy, said it was "the consequence of the repeated lies" of current President Francois Hollande.

Macron's reforms have proved divisive from the beginning.

One of the key planks of the reform allows shops in certain tourist zones – notably the Champs Elysees in Paris – to open every Sunday of the year.

This was a bid to ensure Paris retains its status as the world's most visited city but it irked the capital's mayor, who has opposed the measures

Another element of the reforms is to open up to competition previously closed sectors of the economy such as the legal profession.

Notarial lawyers, who set a fixed fee for their services regardless of the size of the job, will be able to charge clients more or less for certain projects, opening up the sector to competition.

But this reform also ran into significant opposition and prompted the unusual sight of these white-collar workers downing tools and hitting the streets in protest.

The vote of confidence was due to take place at 6:00pm, preceded by a debate in the lower house of parliament.

If the government survives the vote, which is highly likely, the reforms are considered passed without a vote.