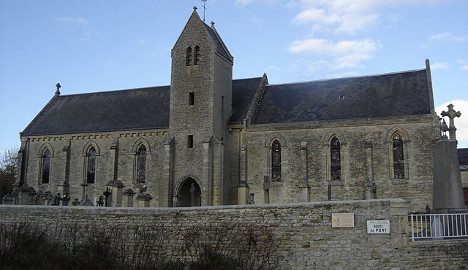 The church and cemetery at Tracy-sur-Mer where several graves were vandalised on Tuesday night. Photo: Pimprenel/Wikimedia commons

News of the latest incident was announced by France's Interior Minister Bernard Cazeneuve, who vowed everything would be done to catch the vandals.

"Several dozen crucifixes were moved, some of them turned over and planted in the ground," Cazeneuve said in a statement, expressing his "indignation".

Prime Minister Manuel Valls also expressed his "disgust and indignation" at the vandalism via Twitter, using the hashtag "#Enough".

The vandalism in the small coastal village of Tracy-sur-Mer on the coast of Normandy comes just days after some 250 tombs were defaced in a Jewish cemetery in the northeast of the country.

The damage caused a wave of indignation in France, which is still reeling from bloody attacks by Islamist gunmen in Paris last month and after anti-Semitic attacks in Copenhagen over the weekend.

"To profane is to insult all religions and defile the Republic," French President Francois Hollande said Tuesday during a ceremony at the Jewish cemetery in the eastern Alsace region.

Cazeneuve said police would begin investigations to identify the culprits of the latest vandalism on Wednesday morning.

"Everything will be done to identify, challenge and bring to justice the perpetrators of these outrageous acts that violate our values and the respect that seals our living together," he said.