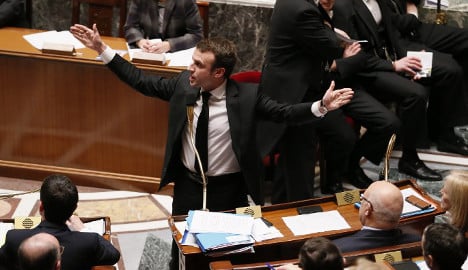 Emmanuel Macron, defends his bill in parliament on Tuesday, but it was never put to a vote. Photo: Patrick Kovarick/AFP

Struggling to win a majority for a set of reforms seen as vital to pep up the sluggish French economy, Socialist Prime Minister Manuel Valls resorted to a little-used constitutional device to push the bill through parliament without a vote.

The bill is now considered approved unless MPs back a motion of no-confidence to bring down the government — which analysts consider highly unlikely.

The no-confidence vote is slated to take place on Thursday.

The move by Valls sparked a fierce political row with pretty much every politician left and right wading in to have their say.

Leader of the UMP party and former president Nicolas Sarkozy said there was no longer “a majority, nor a government”.

Jean-Luc Melenchon from the leftist Front de Gauche said it was a “total failure for Manuel Valls."

"There’s no majority for a right-wing reform in this government. They people didn’t vote for this in 2012," Melenchon said.

But the ex-banker turned Economy Minister Emmanuel Macron, hit back rejecting accusations that the government’s move was a “denial of democracy”

“The government has taken responsibility for reforms that are important and positive for this country. All the articles of this reform were voted through by the majority.”

“If the left does nothing then it useless,” before accusing Sarkozy’s UMP party of failing to bring about change during its time in power.

But French politics professor Philippe Marliere says the use of "article 49-3" to force the bill through was a "clear sign of weakness" from the government.

"By forcing it through without trying to unite those who oppose it, Valls might actually regret it in the long term," Marliere told The Local.

"The rebels in the party will feel that there's no pint because whatever they say or do is ignored," he said. "Valls may be pushing himself into a corner".

Macron's  reforms, which include increasing the number of Sundays on which shops can stay open and liberalising certain sectors of the economy, have proved divisive.

A significant rump of leftist rebels from the ruling Socialist Party, who see the reforms as too pro-business, have vowed to vote against the bill or abstain, but they are unlikely to topple the government on the issue.

"I won't take a risk with a bill like this which I consider essential for our economy," Valls told deputies when it became clear the vote was too close to call.

"With 10 percent unemployment, with the economic crisis that we have, we need to use everything we have at our disposal to boost competitiveness and make our firms more competitive internationally," the prime minister said.

The dissidents, he told TF1 television in a primetime interview, had "other objectives than the problems of the French".

Within hours of the bill, the conservative opposition UMP party tabled a vote of no-confidence over the "forced passage" of the bill but political analysts say there was little chance it would pass.

"There's almost no risk" that the government would lose a confidence vote, said Philippe Braud, a political analyst.

"I wouldn't say it's a failure. It's a precautionary measure that shows that the majority is indeed slim," said Braud.

However the motion of no-confidence is likely to increase the splits in the already divided Socialist Party.

The government spokesman Stephane Le Foll warned party members that anyone who votes in favour of the motion of no-confidence "will no longer have a place in the Socialist Party".

However Socialist Party rebel Laurent Baumel says "he has no fear" of being kicked out of his party.

"We are demanding a new line. If we need to change the Prime Minister to do that, then it doesn't bother me," he said.