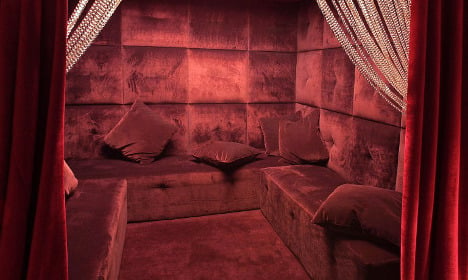 With the DSK pimping trial, the release of Fifty Shades of Grey, and most recently Valentine's Day – sex is on the agenda in France. But for many, there's no agenda needed to furtively slip through a purple tinted door for a night of sexual titillation at a libertine nightclub in the French capital.

At Quai 17, accountants, engineers, businessmen and parents are buzzed inside, where gently flickering lights play across an interior decorated in warm, sensual reds and violets.
Couples like Nathalie and Antonio, Maxime and Aurelia, enter what appears to be a normal nightclub, with a large bar area where a sumptuous buffet is set up, and a mirrored dancefloor.
But a closer look reveals that alongside buckets full of champagne and peanuts on the bar, are glass jars stuffed with condoms.
The discrete club is one of nearly 500 libertine, or swingers clubs, across France — a sexual lifestyle that has come under the spotlight in the trial of former International Monetary Fund boss Dominique Strauss-Kahn.
He denies organising prostitutes for private orgies, but admits to being an unabashed libertine who revels in men and women who “come together for the pleasure of sex.”
“There are so many well-known people like him (Strauss-Kahn) who come here and to other clubs,” Bernard Crouzas, the owner of the club, told AFP.
“I have people I see on television, police, lawyers, magistrates who come here,” he said.
“We all have a hidden sexual side,” said Crouzas.
'It has become fashionable'
France's reputation as a hotbed of European libertinism dates back to a philosophical backlash against the moral constraints of the church in the 16th century, spawning debaucherous figureheads such as aristocratic novelist Marquis de Sade.
Hundreds of years later it is all about the erotic, and it is at libertine establishments — ranging from seedy saunas to chic clubs with exorbitant entry fees — that people from all walks of life come to find sexual thrills.
According to Crouzas, the typical crowd of older couples seeking to spice up a stale marriage has been joined by youngsters looking for excitement.
With Internet and television providing ever more explicit content, and books like 50 Shades of Grey making previously taboo sexual habits mainstream, “it has become fashionable”, he said.
'A touch of madness'
Some come dressed as if they are going to a formal dinner, others in revealing leather and lace with garters and towering heels.
The evening starts off slowly, with couples sipping champagne as red and white heart-shaped balloons bob overhead, going back-and-forth to the buffet, their eyes stopping to linger from time to time on another guest.
Nathalie, 46, an accountant, and Antonio, 47, who has a delivery business, have been married for 25 years and with three children were lured to libertine clubs “to break with routine.”
“It avoids looking elsewhere, it isn't cheating. I love my wife,” said Antonio.
“You must take pleasure from life.”
Nathalie feels their lifestyle is still taboo, and that there are a lot of misconceptions about it.
“Here we respect people,” said Antonio.
“If you say no it means no,” adds Natalie. “Some nights nothing happens.”
Seated at the bar, Maxime, 24, and his physiotherapist girlfriend Aurelia, 23, who have dated for three years, say that they are often the youngest in the room.
To avoid jealousy, they set boundaries, never going beyond stroking and occasionally Aurelia getting intimate with another woman.
“We know our limits,” said Maxime.
But in six months they have only twice found someone with whom they had good enough chemistry to take things further.
“It is a touch of madness,” smiles Aurelia.
The woman decides
Much of the Strauss-Kahn trial has focused on whether he could really have been unaware the women attending the orgies were prostitutes.
“In a libertine context, no woman will ever be paid to show up for an evening and to have sexual relations,” said sex therapist Lauriane Cydzik.
Crouzas said he once got a complaint from a client that a woman was asking for money and she was immediately thrown out.
The trial has also heard sordid testimony from former prostitutes who said they felt too powerless to say no when Strauss-Kahn sodomised them because they were paid.
Cydzik said that this too has nothing to do with libertinism.
“The woman decides what will happen. If a man wants to touch her and she declines because she is not attracted by that man, all she needs to do is raise her hand to say 'no' and the man will withdraw.
“In libertine situations, the woman is all-powerful, contrary to what people may think.”
As the night drags on, the food is cleared away, the music gets louder and the ambiance grows ever more steamy.
Maxime and Aurelia take to the dance floor together, and Nathalie and Antonio join others to explore the passages and alcoves dotted around the club.
Animal print covers and cushions lend a wild edge to carpeted bedrooms open for voyeurs to stop and watch. There is also a cosy cinema showing pornography, and private rooms for couples who want to keep to themselves.
A bouncer keeps close watch to make sure everyone is respectful.
Another couple, teacher Artemisa and her partner Cyril, a public servant, stand watching as naked bodies writhe on a bed.
“We don't participate very much, but it is a turn on,” giggles Artemisa.