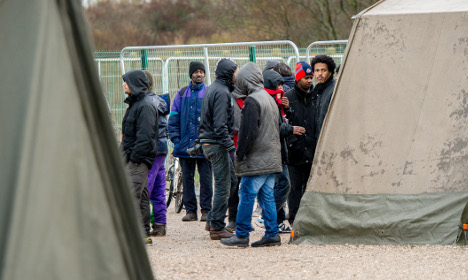 Migrants in Calais wait for hot food. Photo: Philippe Huguen/AFP
The deficiencies of France's asylum policy were laid bare on Tuesday by the Council of Europe, an independent body which aims to improve cooperation between European countries.
The Council's Commissioner for Human Rights Nils Muiznieks presented the report at a press conference in Paris, with France Info able to get a preview of his findings that were severely critical of France.
Muiznieks took particular aim at France's slow treatment of asylum applications and its failure to resolve the crisis in the northern port of Calais, where thousands are living in makeshift camps or in forests.
The report scolded France for the migrants' poor living conditions and urged measures to be taken to protect them from violence, which has regularly flared up between migrants.
In early January, around 200 migrants brawled as tension mounted after the holiday season saw too few trucks crossing the channel.
Muiznieks' findings were based on interviews with charities working in Calais and in the area of asylum, one of which is La Cimade.
Jean-Claude Mas, secretary general of La Cimade, told The Local on Tuesday that France desperately needed to act because asylum seekers are living in "absolute poverty".
"The report highlights weaknesses that we have been stressing for a long time. Politicians need to have the courage to give protection to those refugees who are arriving at our gates from war-torn countries," he said.
Mas says France is too slow at dealing with applications from asylum seekers and doesn't do enough to stop them living in squalid conditions while they wait to find out if they will be granted protection.
Tuesday's report from the Council of Europe also pointed out that there were far too many unaccompanied minors living in France, estimating as many as 12,000. These children mostly do not benefit from health care or schooling, and some of them have even ended up in detention with adults.
The Council also rapped France for not taking its share of Syrian refugees, urging the country to maintain its commitment of taking in at least 500 of the 2 million who have fled.
Authorities in France have often been accused of not wanting to improve the conditions for asylum seekers fearing that it would simply attract more refugees.
But La Cimade's Mas says those seeking asylum would come anyway.
"They are fleeing countries like Syria and Iraq. Who would want to live there at the moment? They come to France because their countries are at war," he said.
"And it's not true to suggest France is overrun by migrants. If you look at Italy they accept a lot more refugees," he said.
'The UK needs to take on its responsibility'
A reform to improve the country's system of asylum is currently going through the French parliament, which if passed should help bring down the time it takes to process applications.
France's interior minister announced last year that a day centre for migrants would be opened in Calais, just weeks after he appeared to dismiss the idea. Campaigners blasted the move as a half measure.
But when it comes to resolving the crisis in Calais, Mas says the UK must take on its responsibility.
"These people want to go to the UK, so it's logical that Britain deals with their demands for asylum on British soil," Mas said.
Since 2003 the official UK border has been in France, in an attempt to stop illegal migrants reaching Britain to claim asylum.
"The UK needs to change its policy. The UK government is hiding behind public opinion but what about our European values, that's what their policy should be based on.
"These people are dying, they are fleeing war. They need protection."
It's an argument regularly put forward by French officials, including the mayor of Calais, who threatened to close Calais to British ferries last year unless London did more to help.

"I think the border should be on British territory because it's up to you to decide the migrants you want to let in or not," the mayor from the opposition centre-right UMP party told British lawmakers. (A migrant brushes his teeth at a Calais squat. Photo: Joshua Melvin/The Local)