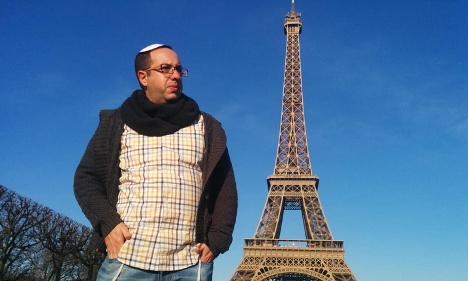 Zvika Klein wearing a kippah in Paris. Photo: NRG news
The video, titled "Ten hours of Fear and Loathing in Paris", was uploaded to YouTube on Sunday as part of a story for the NRG Hebrew language news website.
It shows Israeli journalist Zvika Klein walking through Paris while he is secretly filmed by a colleague with a concealed GoPro camera inside his backpack.
Their aim was to highlight rising anti-Semitism that has left many in the Jewish community fearful.
Last month, the country's main Jewish group said the number of anti-Semitic acts doubled in France during 2014, with acts involving physical violence leading the increase.
Klein told The Local on Monday that his idea for the story was prompted by a report from 2013 in The Local Sweden where a reporter donned a kippah in Malmö, a multi-cultural city with a history of anti-Semitic incidents.
"I thought: Why don't I do that?" he says. "But my wife wanted to kill me when she heard that I'd be doing it in the most dangerous neighbourhoods. We've only been married for five months."
See the video here:
Nevertheless, Klein did indeed make his own video over a year later, an experience he said was both "frightening" and "depressing".
"But on the other hand, I was happy that I wasn't beaten up. I mean, it could have happened, but it didn't. Yes, I was cursed at and spat on, but you've got to stay optimistic."
In his own account of the experiment, Klein explains that he was assigned a bodyguard and together with the cameraman, the team began their day in the tourist areas then moved into the poorer suburbs.
"Welcome to Paris 2015, where soldiers are walking every street that houses a Jewish institution," he writes.
The French government bolstered security outside Jewish schools and places of worship nationwide after the Paris attacks last month, when four people were killed at a Kosher supermarket in the city's east.

Paris: 10 hours, silent walking as a Jew. I got spit at, cursed and threatened. Unfortunatley, this is France-2015 pic.twitter.com/3BZ9Jaqluh

In the video, which had garnered three million views by Wednesday morning (compared to 30,000, when The Local first viewed it on Monday),  a slightly nervous looking Klein turns heads and is apparently spat upon as he strolls down the streets.
"The further from the tourist attractions that we walked, the more anxious I became over the hateful stares, the belligerent remarks, and the hostile body language," he writes.
"At times it felt like walking through downtown Ramallah. Most women were wearing a veil or a hijab, most men appeared to be Muslim, and Arabic was prevalent everywhere. We decided ahead of time that I was to walk through these areas quietly, without stopping anywhere, without speaking to anyone, without so much as looking sideways. My heart was pounding and negative thoughts were running through my head. I would be lying if I said I was not afraid."
Klein ponders at the end of his text if this is really what life is like for Jews who choose to show their religion in the French capital. He concludes that while he may have got away physically unscathed during his day time walk, a night trip may not have ended the same way.
"Jews prefer to stay inside in the evening," he writes. "It is safer at home."

SEE ALSO: Insults and distrust: Being an imam in Milan
France, which is home to Europe's biggest population of Jewish people, has seen more than its share of anti-Semitic incidents over the past few decades. As recently as this weekend, 300 tombstones in a Jewish cemetery were defaced and vandalized.
The Israeli Prime Minister has urged French Jews to "return home to Israel" twice in the last month, while France's government heads have promised to put even more effort into heightening security measures. France's Prime Minister urged the French Jews to ignore the invitation to emigrate to Israel, saying "France doesn't want you to leave".
When asked by The Local if Klein's video was made with the aim of convincing French Jews to "head home to Israel", he argued that it was nothing more than a "journalistic experiment".
"I have been writing about anti-Semitism in France for years. If I wanted, I could write an article about it every day – there's always some kind of incident. I just had to see it for myself."
He added, however, that the media outlet he works for is right wing, and that their "natural agenda would be that Jewish people should be in Israel".
"But almost every news agency has an agenda," he added.
"In my own opinion, I would love the French Jews to move to Israel, but I would hope it would be for positive reasons. But I also see the importance of a strong Jewish community around the world, especially in countries like the US and France."
Marc Knobel, the head of studies at France's Jewish umbrella organization CRIF has told The Local previously that the level of anti-Semitism in France has at times been exaggerated.
"I don't doubt that anti-Semitism exists in certain categories of the French population, and there is anti-Semitic violence in France, but France is not an anti-Semitic country," he said.
"Anti-Semitism exists in all countries, even when there is no Jewish population. It is a worry in France, as it is in Spain, in Belgium and in the whole of Europe."
It's not just the Jewish community in France that is on edge.
But in the 25 days after the attack, 147 anti-Muslim incidents had been reported to authorities in France, not including Paris and its surrounding region — more than for the whole of 2014.
"Our state of mind is one of fear, and also of anger," says Fateh Kimouche, the creator of Al-Kanz, an influential blog for Muslims.
French president François Hollande continues to urge unity and has vowed to crack down on all kinds of hate speech and violence against communities in France.
Since the video came out it has lead to similar experiments, notably in Milan where an Egyptian student dressed as an imam for the day to see the reaction. He was subjected to various racist insults.
And The Local Germany reported how a Jewish man in Munich has been wearing a kippah for years, without being subject to any abuse.
READ ALSO: Fear and giggles – Being a 'Jew for a day' in Malmö