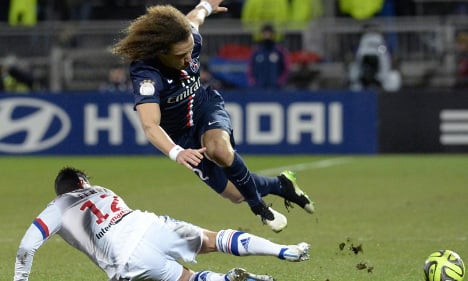 Paris Saint-Germain's Brazilian defender David Luiz (R) vies with Lyon's French midfielder Jordan Ferri. Photo: AFP
PSG and Marseille, who were both held 2-2 over the weekend, remain two points behind Lyon, who have 51 points from 25 games.
A Jordan Ayew header early in the second half stunned the French leaders before they grabbed a point when Clinton N'Jie levelled with 12 minutes to go.
"There's a lukewarm feeling after this game. If you only look at the first 50 minutes, we're lucky to get away with one point," said Lyon coach Hubert Fournier.
"In the last 30 minutes, however, we had the ambition to go and get a victory. (Yoann) Gourcuff coming in helped us as he linked up with his
teammates and it all became easier.
"We had one or two chances in the end to get the win but the result is fair between teams who dominated a half each."
Ghana forward Ayew, playing his first game since losing to the Ivory Coast in the Africa Cup of Nations final, was at the end of a Benjamin Jeannot cross to net his seventh goal of the season just five minutes after coming on at halftime.
Struggling in Brittany, Lyon relied on N'Jie to find the net at a time when a goal seemed unlikely.
The young forward profited from a Wesley Lautoa mistake, exploited by Gourcuff and Henri Bedimo, to apply a low finish past keeper Benjamin Lecomte.
Just three minutes into the game, Jeannot, who has netted six goals in his last ten Ligue 1 games, went through on goal but was denied by a diving Anthony Lopes at the first attempt and Samuel Umtiti on the rebound.
Ten minutes later, it was Rafidine Abdullah's turn to give Lyon a fright with a 25-yard screamer that rattled Lopes' crossbar.
Lyon had to wait for the 35th minute to get their first chance, but Nabil Fekir's low shot didn't worry Lecomte.
– Superb collective display –
Before that, Jeannot was again at the end of a superb collective move involving Vincent Le Goff, Walid Mesloud and Raphael Guerreiro, but Umtiti was on hand to deflect the effort away.
The France under-23 defender could only watch minutes later, though, as Jeannot's glancing header flew just wide of the far post.
Lorient played with fire after N'Jie's equaliser and can thank keeper Lecomte for a fine save as Christophe Jallet's curled strike looked like it
was looping into the top corner with only five minutes remaining on the clock.
The draw prevented Lyon from widening the gap at the top of the table, butit allowed Lorient to leapfrog Toulouse to sit 16th with 28 points, two points above the first relegation spot.
Earlier, Bordeaux defeated Saint-Etienne 1-0 to help their chances of European football next season.
A 42nd minute strike from Diego Rolan lifted Willy Sagnol's side level on 40 points with Monaco and one point behind fourth-placed Saint-Etienne.
It was Bordeaux's first win at home since December 6, while Saint-Etienne failed to win in the league for the fifth straight outing.
"It's a great success against one of our direct rivals," said a delighted Sagnol.
"We knew the importance of this match and could have been seven points back but now we're only one back which is within our capacities."
Guingamp added to Metz's woes with a 2-0 victory away from home. Goals from Christophe Mandanne and Jeremy Pied helped the Brittany side jump to 10th.
Metz, who are in search of a first goal in five games, remain bottom of the league.