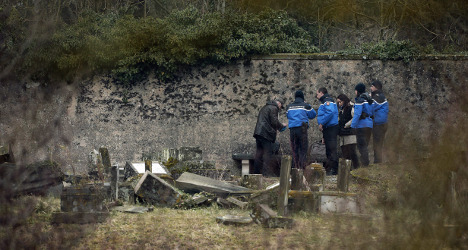 Five adolescents aged 15 to 17 have been taken into custody in eastern France for questioning over the vandalism of Jewish graves, a local prosecutor said on Monday.

All five are from the region of Sarre-Union in Alsace, where around 300 tombs were defaced over the weekend. The youngest came forward after being shocked by the massive reaction across the country to the vandalism, the prosecutor said.

"Apparently, he was very very affected by the scale of the reaction to this affair, including the statements from the highest state authorities," Vannier told reporters.

The boy, who was encouraged to hand himself in by one of his friends, has denied any anti-Semitic motive, Vannier added.

"We don't know the motives of these adolescents who don't have past criminal records and we don't know of any ideological convictions that could explain their behaviour.

"They are very very shocked by the turn of events."

France's interior minister on Sunday described the vandalism as the Jewish cemetery in the northeast of the country as "a despicable act".

"The country will not tolerate this new injury which goes against the values that all French people share," said Bernard Cazeneuve of the incident in the town of Sarre-Union in the Alsace region.

"Every effort will be made to identify, question and bring to justice the person or persons responsible for this despicable act," he added.

Police had cordoned off the isolated cemetery late Sunday as crime scene investigators were sent from Strasbourg to the site, an AFP correspondent reported.

"Around 300 tombs have been defaced," said a source close to the investigation, adding that there had been no reports of anything written on the tombstones.

The region's police and prosecutor came to the cemetery Sunday evening as well the chief rabbi of Strasbourg, Rene Gutman.

"It's an image of desolation," president of the Alsace region Philippe Richert told AFP, describing how Jewish steles, stone or wooden slabs often used for commemorative purposes, were knocked down and even some slabs at the gravesites had been lifted.

"One doesn't knock over heavy steles like that dating from the 19th century very easily. it was a deliberate act of destruction," he said.

French President Francois Hollande called the desecration an "odious and barbaric act" while Prime Minister Manuel Valls, writing on Twitter, described it as  "anti-Semitic and ignoble".

On Monday the pair urged France's Jews to ignore Israeli PM Benjamin Netanyahu's calls for them to return "home".

"My message to French Jews is the following: France is wounded with you and France does not want you to leave," Valls said.

"Jews have their place in Europe and in particular in France", Hollande said.

It is not the first time that a Jewish cemetery in Sarre-Union has been targeted.

In 1988, around 60 Jewish steles were knocked over, and 54 tombs were wrecked in 2001. In 2010 swastikas were painted on tombs in the Jewish cemetery near Strasbourg in eastern France. (Partial view taken on January 27, 2010 in Strasbourg, eastern France, of swastikas painted on some tombs in the Jewish Cronenbourg cemetery.AFP)

News of the latest incident comes just over a month after an Islamist gunman shot dead four Jews in a kosher supermarket siege in Paris and less than 24 hours after a fatal shooting at a synagogue in Copenhagen.

"I am fed up of all these anti-Semitic acts, in their different forms that we saw on January 9 in France, yesterday in Copenhagen and today in Alsace," said Roger Cukierman, president of the Representative Council of Jewish Institutions of France.

Such "cowardly acts" showed a "lack of moral and ethical values" and was an illustration of a failure of France's national education system, he added.

In another incident in March 2012, a 23-year-old man, Mohamed Merah, shot dead three soldiers in Toulouse and Montauban, southern France, before killing three students and a teacher at a Jewish school in Toulouse.

Merah was later killed in a shootout following a siege at his apartment by French police.