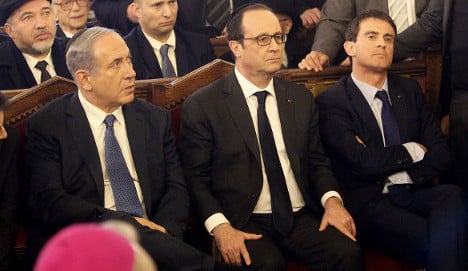 Israeli PM Benjamin Netanyahu sits to the right of François Hollande and Manuel Valls at a service to honour the Jewish victims of the Paris terror attacks. Photo: AFP

Prime Minister Manuel Valls on Monday urged France's Jews to stay in the country after a fresh call by the Israeli premier for European Jews to emigrate to Israel.

"My message to French Jews is the following: France is wounded with you and France does not want you to leave," Valls said.

"Jews have their place in Europe and in particular in France", Hollande said.

Their comments came after two people were killed in shootings in Copenhagen at the weekend that targeted a cultural centre and a synagogue, in a strike that may have been inspired by last month's Paris attacks.

Those attacks left 17 people dead, including four men who were taken hostage by an Islamist gunman at a kosher supermarket.

France's interior minister also said Sunday that several hundred tombs had been defaced at a Jewish cemetery in the east of the country in what he called a "despicable act". Following the Copenhagen shootings, Israeli Prime Minister Benjamin Netanyahu repeated a call he made after the Paris killings.

"Israel is your home. We are preparing and calling for the absorption of mass immigration from Europe," Netanyahu said in a statement.

"To the Jews of Europe and to the Jews of the world I say that Israel is waiting for you with open arms," Netanyahu said.

"Extremist Islamic terrorism has struck Europe again… Jews have been murdered again on European soil only because they were Jews," he said.

The Israeli prime minister said his government was to adopt a $45 million (€39.5 million) plan "to encourage the absorption of immigrants from France, Belgium and Ukraine".

"I regret Benjamin Netanyahu's remarks. Being in the middle of an election campaign doesn't mean you authorise yourself to make just any type of statement. The place for French Jews is France."

Israel is holding a general election on March 17.