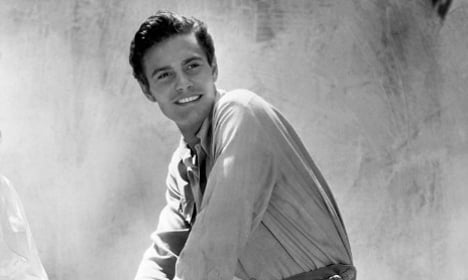 Louis Jourdan in Hollywood, 1948. Photo: AFP
Jourdan died of natural causes at his Beverly Hills home on Saturday, author Olivier Minne told AFP by phone from Paris.
"He embodied French elegance and Hollywood offered him the parts to go with that," Minne said.
Like his contemporaries Maurice Chevalier and Jean-Pierre Aumont, Jourdan used his Gallic charm and good looks to conquer Hollywood.
Over his decades-long career he starred in dozens of films and TV series, acting alongside greats such as Frank Sinatra, Grace Kelly and Shirley MacLaine.
In one of his most memorable performances, he played a leading role in the Oscar-winning 1958 musical "Gigi".
He also notably starred in the 1983 James Bond film "Octopussy", where he took a departure from his usual romantic hero persona to play the villain. (Jourdan with his wife in Hollywood, 1948. Photo: AFP)
Born in Marseille in 1921, he made his debut on French screens in 1939 acting in a string of romantic comedies.
He put his career on hold during the Second World War, when he joined the Resistance.
He was lured to Hollywood by producer David O. Selznick and made his American debut in the 1947 Alfred Hitchcock drama "The Paradine Case".
The actor famously said he never watched any of his own movies and described himself as Hollywood's "French cliche".
His final appearance on the big screen was in the 1992 film "Year of the Comet".
He even made a brief foray onto the stage when he appeared alongside James Dean in an adaptation of Andre Gide's "The Immoralist" in the 1950s, before returning to Broadway in 1978 for French playwright George Feydeau's farce "13, rue de l'Amour".
Jourdan has two stars on Hollywood's "Walk of Fame" and was awarded France's Legion of Honour in 2010 in his adopted home of Los Angeles in the presence of friends Sidney Poitier and Kirk Douglas.
His private life was marked by the tragedy of the death of his only son, Louis Henry, of an overdose in 1981. His wife of six decades, childhood sweetheart Berthe Frederique, died last year.