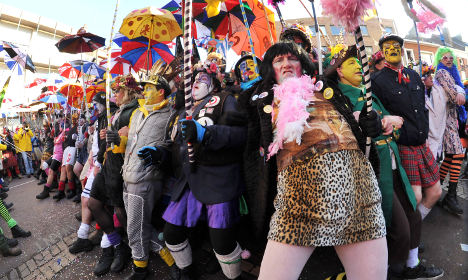 Colourful characters from the weekend festivities at the Dunkirk Carnival. Photo: AFP
The annual festival, which takes place in the city of Dunkirk, northern France kicked off on Sunday with an estimated 40,000 revellers taking to the streets.
The carnival is known for its colourful vibe, with locals and tourists alike taking the chance to dress up and march, dance, and sing.
Many people wear yellow fishermen's coats, as the tradition dates back to when local fishermen would feast before heading off to sea. Documents suggest the carnival has origins as far back as 1676.
The march is capped off by the crowd chanting that they want the "herring they deserve", and 450 kilos of herring is then thrown to the crowd from the balcony of the Town Hall.
Only in France, you might say.
Take a look at some of the colourful characters from the festivities: One had a serious head injury while the other had a less serious injury to his hand.

The northern coastal town of Granville holds a carnival every year in the week before Mardi Gras and attracts over 100,000 spectators.

A 27-year-old man was held by police in connection with the attacks, which happened early on Monday morning.

Ouest France also reported that the man was found to be carrying a gun, fireworks and a grenade.

The attack is believed to have happened following a drunken argument.

This year’s carnival was the 138th and the event is usually known for its family-oriented atmosphere.