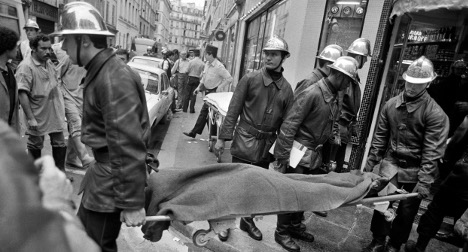 Firemen and a rescuers evacuate a dead person after the French-Jewish delicatessen restaurant Jo Goldenberg was attacked rue des Rosiers in Paris in 1982. Photo: AFP

“Nothing will be tolerated”, said François Hollande, a day after 300 graves at a Jewish cemetery were desecrated in the latest anti-Semitic act to blight France.

The president and the Prime Minister Manuel Valls expressed their indignation at an “odious” act and called for unity in the country.

The pair made a similar plea in January after the Paris terror attacks, which included a deadly shooting at a Jewish store that left four people dead.

Indeed it was a similar appeal that has been made numerous times over the years, almost every time anti-Semitism has reared its ugly head in a country that is home to Europe’s largest Jewish population.

In recent decades there have been numerous anti-Semitic acts, including three at the Sarre-Union cemetery alone, as well as other deadlier attacks that have left the country's Jewish community on edge and persuaded many to emigrate to Israel.

On Monday Hollande and Valls issued another call for Jews to stay in France, but with anti-Semitism on the rise, there will be some, who may look at the long list of incidents (below) and think it’s time to heed the call of the Israeli PM Benjamin Netanyahu and return “home”.

Here's a list of the most shocking acts of anti-Semitism in recent French history.

(Hostages flee after police storm the a Jewish store in Paris on January 9th. Photo: AFP)

(Ilan Halimi, a Jewish man who was kidnapped and tortured by the "barbarian gang". Photo: AFP) (Devestation after the bomb attack on the synagogue at Rue Copernic. Photo: AFP)