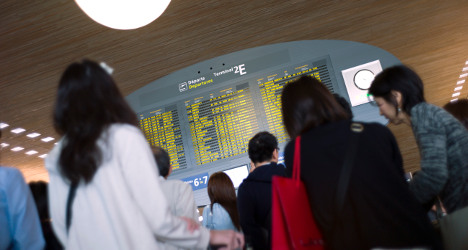 Flights at CDG are set to be hit by a 24-hour workers strike on Thursday and Friday. Photo: AFP

Employees began their walk-out at midday on Thursday and will return to work 24 hours later at midday on Friday.

Civil aviation authorities in France (DGAC) have warned of delays and disruption to flights from Charles-de-Gaulle airport.

For Friday morning, the DGAC has asked airlines to cut the flight schedules by 20 percent from Charles-De-Gaulle.

On Thursday an aiport source told Le Figaro newspaper that most flights in and out of Paris were delayed by around 30 minutes. On Thursday around 300 of the 6,000-strong workforce for ADP held a protest at Charles-de-Gaulle under the banner of "Lets fight unjust austerity"

The strike comes just before the winter school holidays for Parisians.

Employees at ADP are angry at having their salaries frozen this year despite the good financial state of their company.

According to the CGT union, ADP is due to publish its annual financial results next week and report a net profit of at least €358 million ($406 million).

"Nearly 60 percent of the profit will go to shareholders. We want employees to benefit from the good results too," CGT member Fabrice Michaud said.

The group told AFP that it had offered to meet the unions but these had refused, adding its offer still stood.

Passengers are advised to contact their airlines before travelling to the airport.

No delays are expected at Orly airport.