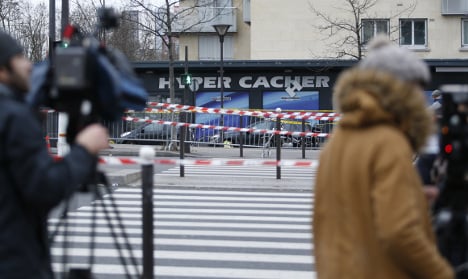 Media swarmed to the scenes of the attacks but have since been rapped for their coverage. Photo: AFP
The warnings were issued for violations including: showing the moment two of the Islamist gunmen cold-bloodedly shot dead a policeman; identifying the two gunmen before police did so publicly; reporting that people were hiding in a Jewish supermarket taken over by a third gunmen; and providing live video feeds of the deadly police assault on the supermarket.
The Conseil Superieur de l'Audiovisuel (CSA) said it determined that 36 breaches of broadcast rules had been committed, to different degrees of gravity, by state channels France 24, France 2, France 3, France 5, France Info, France Inter and RFI as well as commercial broadcasters TF1, LCI, Euronews, Canal+, BFMTV, iTele, Europe 1, RMC and RTL.
The formal notifications served as warnings, but no penalties were imposed unless the outlets repeated the violations.
The CSA said in a statement it recognized the broadcasters' role in "ensuring the public is informed" but that had to be balanced against "allowing law enforcement to fulfil their mission with the required effectiveness".
The news coverage related to a series of attacks by the three Islamist gunmen between January 7 and 9 in and near Paris. They started with the attack on the offices of the Charlie Hebdo satirical newspaper in which 12 people were murdered and culminated in police assaults on two different sites that resulted in the gunmen's deaths.
By airing amateur footage showing the two gunmen walking up to a wounded policeman lying in the street outside the newspaper's office, round-the-clock news channel France 24 committed one of the more serious violations, the CSA said.
Although the channel blanked out the moment of the officer's murder, his voice could be heard — as well as the bangs from the gun.
Another equally serious breach, by iTele and LCI, was showing the identities and names of two of the gunmen — brothers Said and Cherif Kouachi — despite officials insisting they hold back.
"This might have allowed them (the gunmen) to understand they had been identified and were being actively sought, which risked disturbing the authorities' actions," the CSA said.
Most of the broadcasters also announced that the police and the Kouachi brothers had exchanged gunfire in the town of Dammartin-en-Goele, near Paris, on January 9.
"This information could have had dramatic consequences for the hostages" taken the same day in the Paris supermarket by the third gunman, Amedy Coulibaly, in a bid to pressure police to let the Kouachis go.
Finally, reports by France 2, TF1 and RMC about the possibility of people hiding from Coulibaly in a cold storage room in the Paris supermarket "were likely to gravely threaten the safety" of those people, the CSA said.
It added that it was recommending changes to broadcast rules to reinforce the protection of "human dignity" and public order during coverage of conflicts and terrorist acts.
The CSA often issues formal warnings to French media; in 2014 it delivered 45 such notifications.