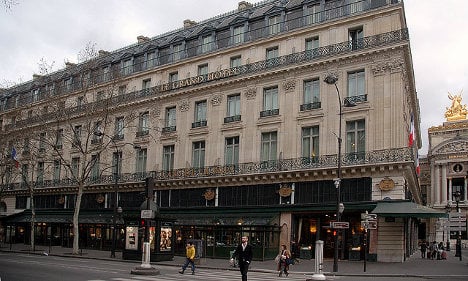 The Grand Hotel in Paris. Photo: Doug/Flickr
Hotels in France, particularly in Paris, are losing potential guests to companies like Airbnb, Housetrip, and Homelidays, which often offer much cheaper accommodation alternatives.
In a last-ditch effort to level the playing field, the French Hotel Union UMIH has penned a letter to France's Prime Minister Manuel Valls asking for the government to crack down.
The key problem, the letter noted, was that the rental sites weren't playing by the same rules when it came to taxes, even though they are essentially offering the same product as hotels.
“Without respect for the rules, our profession, our values, our jobs, and our investments are in danger,” wrote Roland Heguy, the president of the union.
The union protested that there was no increase in job numbers in the industry last year for the first time ever.
One of the key measures called for by the union was the prohibiting of single-night stays in France. The union proposed “a minimum rental of seven days, as is the case in many tourist destinations like New York, Barcelona, Berlin and neighbourhoods in London”. Those on short stays to France would instead be expected to spend their night in a hotel.
Other measures included:
– Paying VAT “from the first euro and onward”
– Introducing mandatory administrative procedures in an effort to “dissuade anyone frightened by paperwork”
– A registration at the City Hall “for all commercial accommodation” and an “obligatory classification for any type of accommodation”
– Consent from each apartment block's homeowners' association (copropriété)
Alain Chauvel, head of reception at the central Paris Hotel Vivienne, agreed that it was time something was done.
“There's not enough supervision,” he told The Local. “If people rent out their apartment solely to tourists, they should have to follow the same rules and conditions as hotels.”
“There are people who don't rent out their apartment so that they can keep it for seasonal renting and for short periods of time, for purely financial gains.”
The head of the French arm of Airbnb told radio channel Europe 1 that hotels were actually benefiting from the presence of the US company.
“We're working on two different systems, offering two different products,” he said.
“They're truly complementary, if you look at the figures: Because AirBnB is in the big cities and most notably in Paris, the occupancy rate of hotels has continued to grow together with their prices.”
A report into the French tourist industry last year raised questions about companies like AirBnb, with French MPs concerned they were being too discreet with their earnings.
“It remains difficult to precisely estimate the activity (of websites such as Airbnb) because they are not domiciled in France and not listed on the Paris stock exchange,” the report by MPs Eric Woerth and Monique Rabin said.
“They are also not subject to the annual requirement to disclose their accounts. It seems that their figures remain secret,” said Woerth.
France is the most visited country in the world, with 83 million tourists a year. The tourism sector accounts for seven percent of the country’s GDP, with annual spending by foreign tourists amounting to €36 billion.