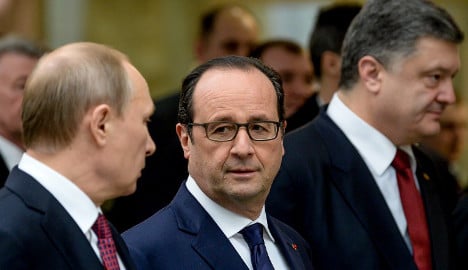 Hollande between Putin and Poroshenko at the talks in Minsk. Photo: Maxim Malinowsky

French President Francois Hollande said on Thursday the next few hours would be critical for a new Ukraine peace deal, adding that it was essential to keep up pressure to ensure the accord's success.

"The next few hours will be decisive as it could go either way," Hollande said as he arrived at an EU summit in Brussels fresh from the peace talks in Minsk, adding: "We will have to remain vigilant, to maintain the pressure and to press ahead."

Speaking at a press conference earlier on Thursday Vladimir Putin announced that the ceasefire would come into force at midnight on Sunday.

"We have succeeded in finding an agreement on the essential," said Putin.

Terms of the ceasefire would include the withdrawal of heavy weapons from the battle zone by both sides and humanitarian assistance being allowed in.

But he claimed there had been sticking points when the Kiev government refused to speak directly with the separatist rebels in Donetsk and Lugansk in eastern Ukraine.

Putin said that part of the ceasefire would be the creation of a safe-passage corridor to allow those troops to leave.

"There is also the political settlement. The first thing is constitutional reform that should take into consideration the legitimate rights of people who live in Donbass.

"There are also border issues. Finally there are a whole range of economic and humanitarian issues.”

Speaking at the same press conference Hollande spoke of "a comprehensive political settlement" being on the cards.

There is "serious hope even if everything is not done yet," said the president.

The deal was reached after 15 hours of tense negotiations between Putin and his Ukrainian counterpart along with Hollande and German Chancellor Angela Merkel.

The pair had flown to Minsk on Wednesday for last-ditch talks aimed at ending the 10-month conflict in the east of Ukraine which has left over 5,300 dead.

They were met there by Putin and his Ukrainian counterpart Petro Poroshenko. The four way summit began at around 6.20pm and continued through the night amid a tense atmosphere.

"Unfortunately, there is no good news. For now, there is no news. Hope still exists," he told AFP, before adding that the conditions imposed by the Russians were "unacceptable".

The talks in the Belarusian capital Minsk on Wednesday represented what Hollande described as “the last chance” to end the conflict in the east of Ukraine and impending "war".

It’s only six months since the last deal was struck in the same city but those accords failed miserably to bring an end to fighting between pro-Russian rebels and Ukrainian forces.

The chances of forcing a deal were made worse by the fact that as Germany's Merkel said, things have got dramatically worse since that day in September, with the death toll continuing to rise and talk of a new push by the separatists, whom Europe and the US insist are being backed by Putin.

Nevertheless Hollande said this week that he was going to Minsk with the “strong will” to achieve a peace deal at a summit that marks the climax of a recent Francà-German diplomatic push.

The French president said he and Merkel would be “active until the last moment of this meeting so that there can be a deal, a global settlement.”