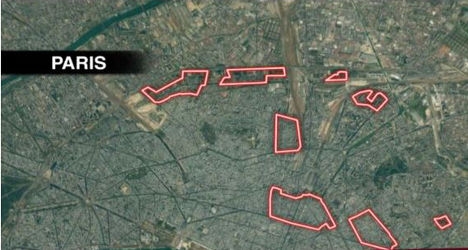 These so-called 'no-go zones' laid out by Fox News has ended up in Paris launching a law suit against the channel. Photo: Screengrab Fox News

In the wake of last month's attacks on Paris, Fox News aired reports, later widely derided, that suggested parts of the French capital and Britain's second city of Birmingham were run under Islamic Sharia law.

The Town Hall will launch a suit "against persons unknown" for defamation.

Paris  mayor Anne Hidalgo said: "I will not accept insults against our city and its people."

Fox broadcast a map outlining the so-called no-go zones, which a man labelled as an expert, Nolan Peterson, said felt like Afghanistan or Iraq.

A Fox News anchor later apologised for "some regrettable errors on air regarding the Muslim population in Europe, particularly with regard to England and France."

In a statement emailed to AFP, Dori Ann Hanswirth, a lawyer representing Fox News, said: "The decision by the City of Paris to bring legal proceedings against a United States news organisation is antithetical to free speech.

"Fox News will invoke every protection afforded it under all applicable laws."