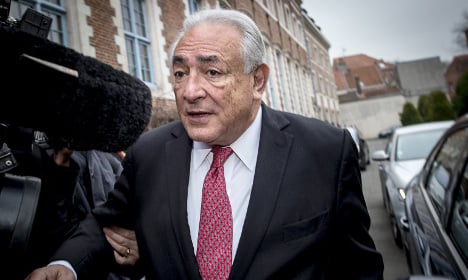 DSK leaves his hotel on his way to court on February 12th. Photo: AFP
On Thursday, Dominique Strauss-Kahn was grilled about his secret bachelor pad in Paris, which he rented under a false name as he was a married man at the time.
The court heard a series of text messages that had been sent between DSK and his associate Fabrice Paszkowski, in which the former IMF head referred to women as "equipment".

Why did DSK rent apartment in name of friend? As married, politician, he says needed 'discreet' place to meet political friends, women.

#DSK SMS: 'Absolute discretion a must, but she's a tidy bit of work and very sexy' (my traslation of 'super bien foutue et coquine')

The most outrageous quotes from the DSK trial so far DSK has already been grilled about his private sexual life, prompting him to lose his patience with the judge and to cry out that the trial isn't about "his deviant sexual practices".
Together with his 13 co-defendants, DSK is facing charges of aggravated pimping. The crux of the case is whether judges believe the Frenchman's claims that he didn't know the women at the parties were prostitutes.
While prostitution in itself is legal, encouraging and organizing its practice is considered to be procuring and is punishable by up to ten years in prison.
Thursday's trial continued to turn heads from the beginning as the court dissected text messages about the orgies sent between DSK and his friends. They used the word "material" or "equipment" to refer to the women involved.
A poll from French newspaper Le Figaro found that the vast majority of the French aren't behind DSK. Just 11.9 percent of respondents said they believed DSK's claims that he was unaware the women were prostitutes. Over 88 percent disagreed.
Three former prostitutes testified against DSK, with one of them suggesting that the "carnage" in the hotel rooms was so far from a "libertine party" that DSK would have to be naive to think that the women were anything but paid to be there.
On Thursday, DSK is expected to be grilled about his bachelor pad in Paris, after he has already been probed about his soirees in Brussels and Washington. The judge is also expected to probe for answers as to how the soirees were financed.
Strauss-Kahn says he only attended orgies a few times a year
Read all the highlights from Wednesday here, and Tuesday here. The trial is expected to last three weeks, and DSK faces up to ten years in prison.