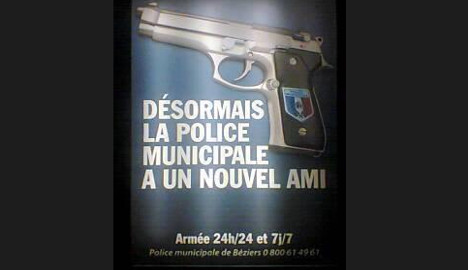 "From now on police have a new friend" the poster campaign from the Wild West. Photo Sarah Rebouh/Twitter

Robert Menard, a far-right local mayor, is no stranger to controversy after he banned halal meals in municipal cafeterias and then imposed a curfew on kids under 13.

The latest row he has provoked revolves around his new poster campaign to advertise the fact police in the town are now armed with a new friend – their 7.65 calibre handguns.

While municipal police in France are allowed to carry arms and most already do, it is the tone of the poster campaign that has left many feeling uneasy.

“From now on the municipal police have a new friend,” reads the giant posters placed around the town, next to a photo of their new handguns.

Sharing the photos on Twitter and Facebook several local residents say the ads belong more in the Wild West than a town in the south of France.

“Béziers, it’s the wild west, with its cowboys,” tweeted Sofia.

Another named Loljak tweeted sarcastically: “Béziers cops have turned into Dirty Harry. Ménard has let it be known with a measured poster campaign.”

Defending  the campaign the mayor told Le Scan “Yes, our town likes law and order. The rules have changed.” He said the posters were “appropriate”.

The local Communist Party however said it was a “provocation.”