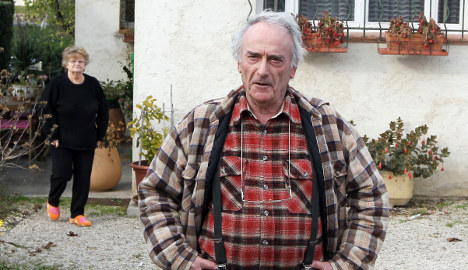 Witnesses at the French trial of a retired electrician accused of lying over how he got hold of 271 Picasso works cast doubt Wednesday on his claim they were a gift from the artist.

Pierre Le Guennec, now 75 and retired, says Picasso and his wife Jacqueline gave him the oil canvases, drawings and rare Cubist collages when he was doing work on the last property the couple lived in before the art legend died in 1973.

But some of the artist's heirs, including his son Claude, suspect otherwise and have filed a complaint against the couple.

One of the main arguments put forward by their lawyer is that Picasso, fully aware of the value of his work, always signed it — whether he gave it away or sold it.

Gerard Sassier, the son of Picasso's long-time chambermaid who for years lived in close proximity to the artist, took the stand on Wednesday.

He said Picasso would often draw something and autograph it for people he liked.

"He did a portrait of my mother every year, he gave her lithographs and ceramics," he told the court.

But he insisted everything was always signed.

According to Sassier, after a theft attempt, Picasso once told his mother who kept the keys to his studio: "Anyway, nothing can be stolen as nothing is signed."

He said that gifting 180 individual works and a pad of 91 drawings that were not autographed was "unimaginable."

Le Guennec said Picasso's wife Jacqueline one day unexpectedly gave him a box with the 271 works of art inside.

He told the court on Tuesday that when he got home, he looked inside and found "drawings, sketches, crumpled paper," adding he and his wife Danielle did not look through everything, not really knowing they were valuable works of art.

He put the present in his garage and discovered it again years later, in 2009.

But when he went to Paris the following year to get the works authenticated at the Picasso Administration, the artist's heirs filed their complaint.

Dominique Sassi, who worked in a ceramics studio where Picasso also came to work, told the court Wednesday that the artist would keep everything, "even his failed ceramics."

And Christine Pinault, an authentication expert at the Picasso Administration, said that among the 271 works were eight very rare Cubist collages, as well as "intimate souvenirs" such as a portrait of his first wife Olga and of a girlfriend called Fernande.

"One can't imagine he could have given them to another person," she said.