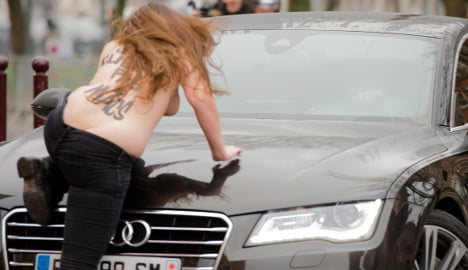 One of the topless Femen protesters mounts DSK's car as it arrives at court. Photo: Denis Charlet/AFP

With slogans scrawled on their half-naked bodies and hurling insults at the car, the three protesters were quickly rounded up by police as the car entered an underground parking area.

Their protest was caught on camera by some of the reporters and TV crews who were attending the trial.

Femen activists jump on DSK car as he arrives for trial, 'pimps, clients, guilty' and 'your turn to be fucked' written on chest @AFP

"Your turn to be fucked" #Carlton #DSK (photo @AFP) pic.twitter.com/qA62hhQPMa

Police were forced to grapple with the women to allow DSK's car to get to the court.

The spotlight swings onto the 65-year-old in the second week of the trial in the northern city of Lille which involves 13 other accused, including police, a lawyer, a prostitute and a brothel owner known as "Dodo the Pimp".

READ ALSO: Ten things you need to know about Dodo the Pimp

Strauss-Kahn will have three days to fend off accusations that he organised for prostitutes to attend sex parties in Paris, Brussels and Washington. He will be face-to-face with two of these women, now retired sex workers, in court.

Strauss-Kahn attended the first day of the trial — luring some 300 journalists to the court — but his name has only been mentioned in passing by the judge, as French court rules forbid defendants from mentioning anyone not in the room.