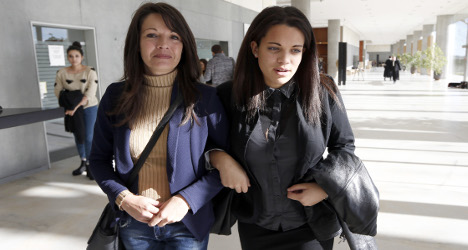 Twenty years ago two baby girls were mixed up at a clinic in the French Riviera city of Cannes, southern France and ended up growing up in the wrong families.

On Tuesday, a court in the southern town of Grasse ordered the clinic at the centre of the mix-up to pay €1.88 million ($2.13 million) — six times less than the families had called for.

However, the court threw out a suit against doctors and obstetricians also brought by the family.

One of the mothers, Sophie Serrano, 38, voiced her joy and "relief" at the decision.

"Finally, after so many years, the error has been recognised. Now, I'm cleared of everything. I've no reason any more to feel guilty for anything," Serrano told French television channel iTele.

The extraordinary story began on July 4th, 1994, when Serrano gave birth to Manon in the clinic in the Riviera city. But a hospital worker later returned the wrong babies to their respective parents, according to an inquiry that was conducted a decade later.

The mothers sensed something was wrong, and Mrs Serrano pointed out to hospital staff that her daughter had light skin but now appeared much darker.

Staff dismissed her concerns, saying that the difference was due to the effects of the lamps in the incubator.

But over the following years the doubts grew ever stronger. Manon Serrano was frequently teased in her village near Cannes about being the “postman’s daughter” because she did not resemble her father.

The father finally decided to get a paternity test done when she was ten. It proved that he was not her biological father. But the even bigger shock to the family was that it also proved that Sophie Serrano was not the child’s mother.

A subsequent inquiry established that the other girl had been growing up in another family just 30 kilometres away from the Serrano’s home.

“They took my innocence away,” Manon Serrano told Nice-Matin newspaper. “They took away my dreams, my hopes, my desire to have children.”

The two families met but decided not to try to have the girls reunited with their biological parents, and they did not remain in touch after their initial meetings.

“I don’t see my biological daughter anymore,” Sophie Serrano told Nice-Matin. “The social, educational and cultural differences (between the two families), added to the pain of our unconscious rivalry, took their toll on our relations.”

But she said that she “instinctively loved her biological daughter” from the moment she met her and that although she officially only has three children, “in my heart I have four”.

The families pressed charges against the clinic when they first learned of the error but the case was dismissed as the incident had happened a decade beforehand and came under the statute of limitations.

Now they are seeking compensation in a civil suit which came to court  in December last year. They sued the clinic, the doctors who supervised the births, and the auxiliary nurse.

The Cannes clinic had admitted fault – it blames the baby exchange on the nursing auxiliary who it said suffered from alcoholism – but says it will not pay any damages.

"If it happened to us, it may have happened to others," Sophie Serrano said after December's hearing, holding the hand of her non-biological daughter Manon.

"There should be exemplary sentences…. We really hope to get this recognition, so as to free us from all this guilt about not having been able to protect your kid, not having insisted when we saw there was a problem."

For her part, Manon said she was shocked over accusations levelled in court blaming the mothers for not having recognized their children.

"She protested, she found herself in front of a qualified nurse, she was very young, she had just had a child, so putting the blame on her is absurd, I find that inhuman," she said.

The other family involved in the case also attended last year's closed-doors hearing but have opted to remain anonymous.

Speaking after Tuesday's verdict a lawyer for one of the families said they were "completely satisfied with the decision" and "relieved that the court had recognised the clinic was responsible."

There was no question of the families appealing the decision, said this lawyer.

The lawyers' office representing the clinic noted the "significant difference" between the amount requested and the sum the court demanded, acknowledging nevertheless that the damages awarded were "high".

The lawyers said they were waiting for the details of the judgement before considering a possible appeal.